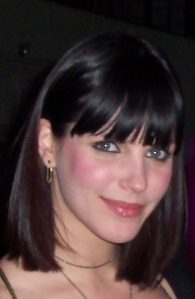 When I walked onto the convention floor during the Adult Entertainment Expo in Las Vegas a couple of years ago I headed directly for the Evil Angel exhibit. In the days when the glitz was held at the Sands Convention Center, the big moneyed studios greeted visitors like upscale strip clubs along an urban block. Aligned in a series of mini-stages strung across the floor, their garish opulence—bright lights, gigantic posters of their stars, loud music, and bar stool-like tables for autographs and photo ops—shouted for attention. For the fan, the drill is whip out the camera and start snapping away then quietly queue up for a moment with a favorite girl.

But I wasn’t there as a fan.

My urgency was to locate Bobbi Starr before her signing time began. She had emailed me earlier to stop by to discuss some ideas on a media presentation she had been asked to do. In fact, other than emails, I had not actually met her in person.

I got to the cordoned off area just beyond the Evil Angel space and waited politely while Bobbi  finished an interview with a Vegas newspaper. I ducked under the rope and slipped her my business card. She smiled and motioned me into the reserved area where we chatted briefly before she invited me to breakfast the next day. I’m certain that my ignoring the company imposed barrier mattered little to anyone there, but I suddenly felt a bit like a kid who sneaked into the ballpark without a ticket. It was kind of cool.

At eleven the next morning, we sat down in her hotel’s café for an extended conversation. She ordered breakfast; her boyfriend nursed a Starbucks coffee. I have become the absent minded professor I found so humorous years ago as an undergrad; I forgot my digital recorder, something Bobbi reminded me of the next time we planned to meet.

“Don’t forget your recorder,” she said with a hint of humor.

So this conversation was a get-to-know-you session, and I had no idea what to expect. The first thing she said caught me off guard.

She didn’t elaborate but probably felt the necessity to educate an academic who was just beginning his investigatory work. Bobbi is perceptive. I fumbled around looking for a way to segue into the feminism topic she mentioned in her email. We continued to talk about a number of things before walking to the convention center for her signing time, a “meet and greet” with her fans.

Bobbi’s boyfriend “SSippi,” as he is known among her friends and fans, said little as is his habit when Bobbi is center stage. On other occasions, he and I have talked while she worked. “SSippi” is instantly likeable and I will tell you about him in a future blog post.

Fast forward a year and some months later. Breakfast again, this time it’s a cold windy morning in Toronto. Bobbi grants me over an hour of her time and a lot of topics are covered. Had she asked me on that other morning if I understood what she meant by her opening remark, I would have been uncertain of my response. But now I had done enough interviewing to know how she and other adult film performers felt about “fantasy” and their fans.

I have come to understand the authenticity that is Bobbi Starr.  She fervently believes that her fans deserve her attention. She is spot on when she says that men can be fragile and she wants to make them comfortable in her presence. Bobbi got all the right genes, you understand, and this can make her intimidating to the ordinary guy who approaches her at a convention.

The fan has literally has seen all of her having sex with men who can disarm the average man-on-the-street with their physical assets, so easing a fan into casual conversation is important to Bobbi.

There is an overpowering difference in those words.

Unfortunately this attitude does not always go down easy with some admirers who, in their private mental world, become possessive and obsessive of a performer. As a result, everything must be finessed. And Bobbi is good at it, very good.

She wants to “blend the fantasy,” as she told me. Bobbi will not “break down” whatever self-defined images of her the fan brings to the table by being rude or unpleasant. Yet sometimes fans can become too insistent on her attention. Those who send her gifts crave  recognition and a few, who believe a gift translates into personal ownership of her time, can become irritating. No matter their attitude Bobbi is respectful, sending notes, thanking them, and offering free website minutes or a DVD for the most generous. With a smile that acknowledges proper upbringing,  she tells me her mother raised her to be polite.

Bobbi Starr is an entertainer and a businesswoman.  She has a family that supports her career, a boyfriend with whom she shares that elusive emotion of love,  and colleagues who respect her. She takes political stands within the adult industry on the value of female directors and the need to observe health precautions in filming. Most recently she has been tapped with three others to represent the performers’ view in the new health plan for the industry, Adult Production Health and Safety Services (APHSS).

And, Bobbi is now a director for John Stagliano’s company, a long due recognition of her intelligence  and creativity.

It is a balancing act, all this finesse, and Bobbi understands how to make it work. She humorously quotes the nursery rhyme about little girls, “sugar and spice and everything nice, that’s what girls are made of.”

I don’t know about all little girls, but I do know Bobbi Starr and she is one remarkable woman.