Much of  Evil Angel’s Voracious is an in-house project. The male leads in order of appearance are Manuel Ferrara, Steve Holmes, Omar Galanti, and Rocco Siffredi. Each actor also directs for the studio. 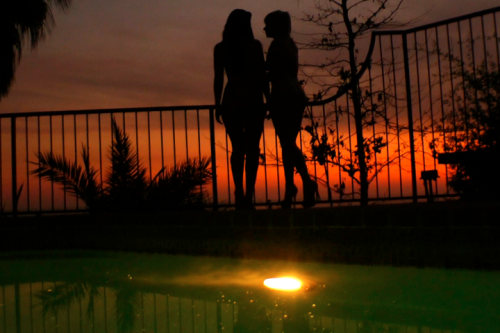 “But you are not alive,” Adriana reminds Amira.

Surrounded by a watery motif—the pool outside the house and the Pacific Ocean in the distance—Adriana and Amira talk. Water is the source of life and rebirth, something worth remembering as this saga continues.

Dusk is setting in.

Amira has violated the code, it seems, because the clan must approve any human she wants to bite. Adriana suspects Amira has doubts about the demonic promise of eternal youth.

“You like him because he is human,” Adriana says with a hint of understanding before hurling an admonishment at Amira.

“You need to learn to control yourself.”

Even vampires, like the monks of the Middle Ages, must exist by regulation and self-restraint.

“We leave tomorrow.” Adriana’s tone demonstrates waning patience with Amira’s transgression. Their impending return to the Old World where vampires are legend will present challenges unforeseen by either woman. 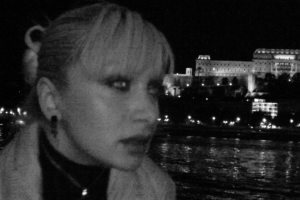 This episode, “Now You Are a Blood Slave,” is about the hunt. In black and white grainy footage, Adriana and Amira emerge from the river that runs through the city of Budapest.

The story quickly shifts to a park in this heart of mythical Vampireland. Hookers apparently frequent this scenic little spot and one girl cautiously reminds a passing pair of nubile blondes that it is not a safe place.

Vampires Prey and Play in the Park

The power imbalance between the undead and the living is revealed in speed and metal during this episode. Adriana and Amira arrive in a car and proceed to stalk unaware victims who will supply blood to hungry vampires. Immediately, Dracu, played by Italian star Omar Galanti, appears on a motorcycle with a female passenger who has a nasty bite of her own. They are part of the clan and it’s time to recruit new members, fresh blood, if you will. 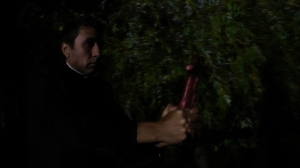 In a comment on religion and sexual repression, Stagliano’s camera captures the small silver crucifix that dangles from the priest’s neck as it floats above his erection and the girl’s mouth.

European pornography, especially in early French stag films, occasionally takes a shot at religion. American prudery generally finds such behavior offensive but when in Rome, as they say, . . . permission is given to be a Roman.

Dracu’s passenger, the Vampire Mistress (the lovely Sandra Romain), corners the poor girl and gets the sustenance she needs with a well-placed bite. 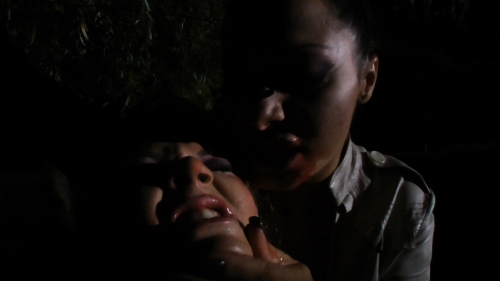 Dracu and Adriana have a fresh human captive to initiate into the clan, the willowy Hungarian Bibi Noel .

But before ritual begins, Adriana slips the word to Dracu that Amira is not what she should be.

“She tried to bite without permission,” Adriana whispers to him, “I think she has doubts about being a vampire.”

Is vampirism a choice and can a girl check out of the clan whenever she wants?

For the second time, a disciplined Amira is cut out of the opportunity to bring in a blood slave. Dracu exiles her to the house and she watches briefly from afar. Director John Stagliano now sets the tone for the rest of the series. Everything is not all dripping red roses in Vampireland.

Ah, the feast.  The viewer should know that it’s truly a heartfelt tribute to the great work of Bela Lagosi and Christopher Lee who, had they performed in a different age, would have delighted in this scene.

Adriana and Dracu feast on Bibi

Incidentally, the prolific exchange of saliva in these episodes is a reminder that existence, even a vampire’s, is water oriented, though perhaps among the undead it coagulates a touch more.

The predominant image that prepares the meaning of the sex is Dracu’s motorcycle leap arcing across the screen at sunset. The suggestion is a passage between two worlds, the living and the undead. In fact, a similar bridge is formed during the extended physical encounter that is part of the blood slave ritual. It takes place among scores of motorcycles. Adriana, back arched beautifully—a reminder of the satyr statue in the first episode—positions herself so she can fellate Dracu from underneath. Once again she is seeing a reverse world in which the undead are the living. During the action she is orally serviced by Bibi’s blood slave. The shot forms a stairway effect, rising from left to right, that leads the blood slave to her Master, Dracu.

Adriana’s acrobatics introduce another, more sinister, image. Didn’t they break witches on the wheel in 17th century Europe? Adriana hints later that she has been around for five hundred years. Perhaps her position is a tortured part of her past.

As the episode closes questions arise. How strong are the bonds in the clan? Did the chastised Amira go through a similar initiation?  If so, why does she seem so independent minded? Will a power struggle later emerge? And, most important, who’s running this show?

Maybe a few hints will come around in Episode Three.