This episode introduces Rocco Siffredi as Vlad. Siffredi is a long-time associate of John Stagliano and directs for Evil Angel.

Back in Los Angeles Manuel Batiste is probing further into the vampire mystery. Father Zoltan responds to Manuel’s inquiry by offering to video conference giving Manuel a chance to raise questions about the vampire killing and meeting Adriana and Amira. During their talk, the priest adroitly deflects Manuel’s concerns while pursuing an issue of his own.

Speaking of Adriana and Amira, Zoltan asks, “They are friends of yours?”

Manuel says “no,” but he wants to locate Amira.

The priest turns icy. “You have seen a lot, Mr. Batiste, and we’ll get back to you.”

With that, the call terminates and begins Episode Four, “You Can Never Leave the Clan.”

Nobody Can Leave Again

The hookers have returned to the park, they are blood slaves, not yet full-fledged vampires. Their task, one of the slaves announces, is to “feed the vampires.”

Luring Blood for the Vampires

They have no luck until a motorcycle pulls up.

“He’s the one who can help us,” the taller slave announces. She is played by Russian beauty Ivana Sugar, who sports a resemblance to Paris Hilton in face and figure.

With an assured presence, Ivana’s slave says, “Follow me.”

They arrive at a wooden dock that appears to access to an inlet or lake. Once again the water motif runs through the narrative. Here the water is more expansive than the hillside pool in LA and unlike the Pacific, very calm, perhaps indicative the clan’s self-satisfied control of its adopted environment. 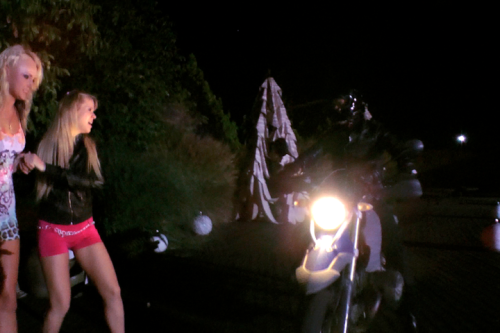 “I think maybe he’s over there,” Zorah’s slave says.

They walk on until startled by Dracu who appears from nowhere the moment the motorcycle pulls up. The rider is Vlad whose status in the clan is not clear at this point, though it is apparently superior to Dracu’s. 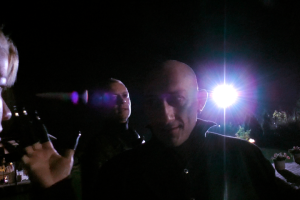 “Nobody can leave again, nobody,” Vlad asserts. Is Amira doomed to never be free if this is what she wants? Or, does Vlad’s self-assurance forebode a conspiracy that will challenge his power?

Attention is drawn to the blood slaves. Vlad reminds Dracu to tell them once they are vampires, they can never leave. Vlad approaches Ivana’s slave and asks if she knows she is not a vampire yet. “Yes,” she replies.

And with that, the sexual encounter of this episode begins. Dracu backs out of the scene at the beginning in deference to Vlad, much the way a medieval inferior would cede an offering to his overlord before partaking himself. The girls are Vlad’s toys at this point. He starts by pinning Ivana’s hands behind her back in bondage fashion and grips her face to let her know the sex to come will be rough. She arches her back and drops her head like the girl with the satyr in episode one.

The sex begins in slow-motion with a guttural over voice that is reminiscent of a growling vampire wolf. Vald’s motorcycle sits in the background and like the painting in episode one, lords over the dock and its entertainment.

This part of the shoot is beautifully done. Eventually Dracu joins in. Saliva and spit is minimized. The oral skills of Ivana Sugar steal the scene. Her performance is a reminder that no female performer in this film ever gives the impression she is in it for a paycheck. The enthusiasm and hard work of all the female performers in Voracious is remarkable considering the length of time invested in the episodes. The girls in this scene appear to thoroughly enjoy themselves.

Finally, Vlad takes the two blood slaves into a sauna on the dock. Their throats are ravaged, a bit of blood flows, and the deal is sealed.  The viewer cannot resist admiring the work of both girls when the action moves indoors. Ivana responds to Rocco Siffredi’s guidance through the scene with tenderness and a smile. She playfully kisses his abdomen in a moment that seems oddly placed in a vampire film, but speaks volumes about an Evil Angel production and the pleasure many performers get from working with Rocco.

Vlad secures his new vampires, but he has a task before him. What to do with Amira?