It’s crunch time for me and I don’t mean holiday shopping. John Hunt Publishing of the UK is preparing my book, Pornography Feminism: As Powerful as She Wants to Be for distribution. The official release date is January 30, but it is available now at a pre-release price. You can find it at Amazon and Barnes & Noble.

I’m beginning a new phase in the life of an author, marketing. It has become my holiday version of “got to get this done” and I’m learning as I go, just as I did when I first ventured into the adult film community.

Six years ago I began to mingle with pornography people. I listened, took notes, watched them work, and paid for my share of meals. Never did I imagine that a blog would come out of my industry networking. In fact, it was a student of mine who suggested I begin a journal. Inevitably, a twitter account followed and then the big break, an offer to write for Adult Industry News, an online publication out of LA. It’s among the websites included under the Links of Interest tab at the top of this page.

To make a go of the book I wanted to write, I sought out feminist performers and directors. Of course, feminism and pornography aren’t exactly bedfellows (pun intended) in American social history. Consequently, I never knew where the field work would lead and I did have my surprises.

Two things I have learned when girls step out of the limelight. First, some will immediately disappear, drop off the radar without a forwarding address. Negotiating life after porn is a tricky proposition that can inhibit available options in rebuilding a civilian normality. In some cases, an “I don’t want to talk about it” mentality takes over and must be respected. Second, and this is related to the first, some girls show up again in the industry with renewed purpose. The most recent example is Nadia Styles who was “saved” by anti-porn Christians but has returned to filming with the message that she is glad to be back.

Nadia’s story, as reported by Adult Video News, is here.

Another example is the legendary Aurora Snow who retired to the American heartland a year ago. Word is that she will be around during the AEE convention in January, but has no intention of stepping in front of the camera.

Since the presses are now rolling, it’s appropriate to update a pair of retirements with personal “thank yous.” Each performer contributed significantly to my field work. First, Bobbi Starr, without whom Pornography Feminism would be an unfinished shell of a book. Recently retired after eight years in the business, Bobbi now lives quietly in married domesticity. Raising a family takes all her energy, she tells me.

I’m not surprised. I remember meeting Bobbi for breakfast a few years ago in Vegas. In our conversation, she mentioned that adult film was a phase of her life she was doing the safest way possible. When she started a family, the formally trained oboist insisted, all on-screen appearances would come to screeching halt.

The native Northern Californian always had a plan, a sense of responsibility, and a ton of industry respect to go with it. 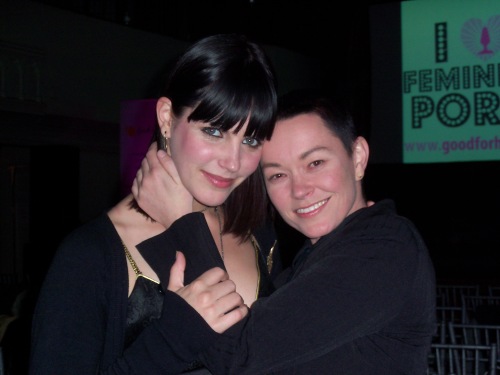 Bobbi and Jiz Lee in Toronto in 2011.
Photo courtesy of 3hattergrindhouse.com

Transitioning from performer to director, Bobbi understood what it meant to call her shots in a male-dominated industry. Undoubtedly, the statuesque brunette could have remained behind the camera for decades to come, but she walked away on her own terms, contented and ready for the next phase of her life.

Next is Tara Lynn Foxx, who like Bobbi Starr, was always generous with her time and opinions. I remember talking with TLF when she was just breaking into the business. Over the years, catching up with this sweetheart had its amusing moments. Once I interviewed Tara while she was taking a time out in Vegas. She was without her undies, a violation of convention protocol, and was waiting for their delivery! In another instance we chatted as she sat in the make-up chair. That night, everything was a rush. 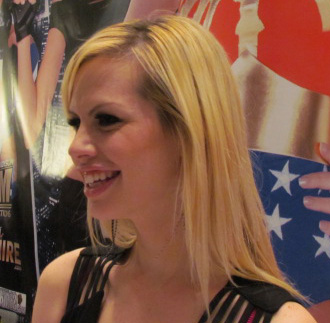 TLF in Vegas in 2012.
Photo couresy of 3hattergrindhouse.com

The San Francisco girl who started in webcam paid her dues and on occasion suffered the vagaries of being in the business. Over time her personal grit forged a solid career that, like Bobbi’s, will be worthy of eventual induction into the AVN Hall of Fame.

In the meantime, Tara Lynn Foxx informs me the end is at hand. “I’m actually retired and not shooting anymore. I’ve changed paths.” The performer I watched develop from a teenager into a sultry young woman is moving toward a new profession in the culinary arts. For more on Tara’s plans, check out her website.

Nevertheless, memories often linger because transitioning into civilian life is not always easy.