Unfortunately, I am a day late and a dollar short, as the old saying goes, Ela and I are meeting for the first time at this year’s AVN trade show. Because my book on the history of feminism in adult film was recently released, her thoughts and experiences are not in it. The best I can do is rectify that oversight here.

Born in California, Ela is a late twenty-something who spent her youth in Texas, completing her undergrad degree at the University of Texas at Dallas. Growing up in the Lone Star State had its moments, but this blonde honey decided life beyond the southwestern plains offered her more.

“I got out of Texas as quickly as I could,” she says, and headed to the University of Illinois at Urbana for a Master’s in Library Science. She was twenty-one.

At twenty-two she was a working librarian and did some non-nude bondage stuff for extra cash. Fetish opened a door and Ela made her way into “porn-porn,” as she calls it. She was now twenty-three, old enough to understand her sexuality and what she wanted out of it.

Image drives a career and Ela’s is a classic. Her look has always been the “girl-next-door” with a bit of intellectual nerdiness thrown in, perfect for a bondage model: the quiet girl in the corner who gets off on being tied up.

A couple of get-to-know-you questions tells us Ela’s family is very supportive of her career, she’s a Harry Potter aficionado, but not a sports fan. “If it’s not played on a broomstick, I probably don’t know anything about it,” she says with a twinkle.

Moving right into her feminism, Ela prefaces her remarks with an inside peek at porn’s working environment.

She believes that feminism allows adult film women to have control over their sexual destiny and how it is expressed. “If I want to do something because I want to do it [and] it’s fulfilling to me, that’s awesome. It doesn’t matter if someone else isn’t into it.”

For the record, Ela Darling began in the business doing girl-girl and has recently added boy-girl to expand her name recognition and pump up demand for her image. If anything, she has taken her ride through pornoland on a slow train, this is year five of her career and the pieces are falling into place.

Ela on the AVN Red Carpet, 2015.
Photo courtesy of Ela Darling and industrybyrick.com

Help Them have a Voice

Unlike some girls in the industry, Ela does not escort. “I don’t have anything against escorting,” the liberal-minded lass says, “and I respect women and their hustle. Whatever they feel is right for themselves, I think is awesome.”

Men sexualize women all the time, Ela points out, but if a woman tries to use it to her advantage and collect money as a result, she suddenly becomes a whore. There is a power imbalance at play that is further aggravated by society’s attempt to trivialize and infantilize women.

“I don’t think there is anything wrong with prostitution,” Ela says, “but what I do is not prostitution. It’s for the sake of entertainment. The legal definition is different.”

None of these factors apply to prostitution.

Women in the adult business are controlling their “sexual destiny,” Ela declares. “To try to take that away from us is to take away a lot of power that we inherently have.” 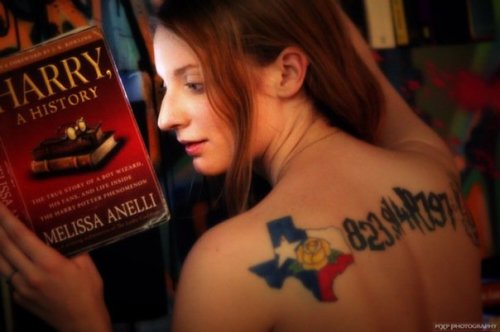 A Harry Potter fan, but not a stuffy librarian!
Photo courtesy of mxp photography and Ela Darling

“Reclaiming that power is a big step in personal freedom. Personally, the further I go in my career, the stronger I feel, the more liberated I feel. My independence and solvency get better the more I engage in my work. Implying that anything I do must be bad or negative,” she says, is “taking away my autonomy.”

“Why don’t you talk to me and acknowledge me as a person and the fact that I’m doing this is actually great for me,” Ela continues. “If you would only consider my perspective, rather than deciding that because I do what I do, I no longer get to have a voice.”

Ela then acknowledges other sex workers as if they are shadows hovering around us.

“These are women who don’t have a voice, they can’t speak for themselves. Help them have a voice. Give it to them and hear them and listen to them.”

Ah, Ela, I wish we had met earlier. Your words would be forever recorded in the pages of Pornography Feminism.

It is a pleasure to know you.

In the second part of our interview, Ela talks about shooting bondage scenes and working for Kink.com.