Why Can’t We Have It All? Part Three

The popularity of “Behind the Scenes” is growing in adult DVDs. The BTS humanizes the people in front of the camera, allowing the fan an inside peek at the playfulness of performers as well as their serious side.

A fun off-screen moment of dueling subs, small in size but huge in sexiness.
Photo courtesy of Jeff Koga

In her BTS interviews, Jacky St. James often explores how performers relate to the roles they play in her films. Here are some comments from The Submission of Emma Marx: Boundaries.

I Couldn’t Handle Any More Sex

Penny Pax and Richie Calhoun chat about alternative relationships like the one they have in the film. Though each admits they’ve experienced similar situations in their private lives, they have different takes on what it means for them personally.

Richie has seen these types of relationships “explode” because someone cheats. “[The people] have an open relationship and somebody jumps out and does something the other person can’t handle,” he explains. The relationship can get “lopsided” because one person is doing everything for the other person. Consequently it’s “easy for resentment to build up,” Richie points out.

Penny is more conventional in her attitudes, much like Emma’s sister, Nadia.

What advice would Richie and Penny offer anyone watching Boundaries and thinking about having an open or flexible relationship?

“Respect you partner,” Richie offers. “Try to hear what they feel, what they want.”

He concedes, however, that his opinions must be taken in context. The only relationships he’s ever had have been open ones. “I’m more of the Richie show,” he muses, because anything long-term is a “tall order” and not on his agenda right now. Then, as if to clarify what he means concerning flexible arrangements, Richie points out that performing in adult film is not considered to be an open relationship in his mind. 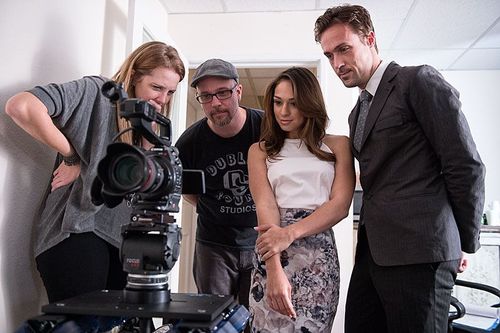 Richie and Sara Luvv look on as Jacky and Eddie set up their scene.
Photo courtesy of Jeff Koga

Penny agrees that the “gray areas” presented in open relationships must be discussed among everyone involved. For her, communication is not a problem because she is a talker. But like Emma, she also has a vivid imagination and tends to fall into the trap of thinking “something crazy is happening, but it’s usually not.” Penny’s caution and her awareness of how emotional reasoning can play tricks 0n her perceptions authenticates her role as Emma.

Later Penny talks specifically about her role as Emma.

Boundaries was easier for her than the original film because Emma revisited is more what she, Penny, is like in her personal moments.

As a positive thinker, Penny wants Nadia to progress and get to that final destination. But the diminutive superstar is pragmatic. “There are two types of people in the world,” she says, “those that will do different things and those who won’t.” In other words, there are risk takers and people who hold back.

“I’m hoping she [Nadia] blossoms and there will The Submission of Nadia Marx movie,” Penny says with a smile.

Asked if she has personally encountered criticism about her sexual choices similar to what Emma faces in Boundaries, Penny is honest. She has.

However, the sexy five footer counters disparaging remarks with “you guys don’t know what you’re talking about.” When people don’t understand something they “tend to shy away from it [because they have a] fear of the unknown,” she adds.

Penny claims she likes to “be the guinea pig,” the first to try something out. Commenting that she hears from old high school acquaintances who want to know if what she does is “real,” her answer is, “absolutely.” The twenty-five year old enjoys all the sensations she experiences in her shoots and hopes that she can encourage people to think about doing some of them in their lives.

“That’s hard to say because my definition of sexually open has changed so much.”

“I’m cut from that sexually exploratory cloth,” she says with that Penny Pax trademark, an upbeat demeanor.

A girl who enjoys her job!
Photo courtesy of Jacky St. James

Also, she’s not done any “large groups of people gang bangs.” Her professional history is limited to a six-person affair, which she did for Kink.com.

Gang bangs are exciting on two levels, Penny says. First is the “actual experience.” It’s “adrenaline pumping” and “really exhilarating,” an “extreme sexual act” that she likens to skydiving.

“Having five guys trying to use you at the same time was really fun for me.” Because of the “chaos” it creates, however, the act is not an everyday thing!

As for the second part, Penny enjoys reviewing her shoots. Unlike some girls who never look at their own movies, Penny comments that being “able to watch [herself having sex] on camera is deeply satisfying” because she can relive the thrill anytime she wants.

Complimenting his co-workers, Richie chimes in that on-screen sex is at its best when performers get their energy from each other. A true illustration of  what it means to be a professional.

Put Them Ahead of You

To wrap up the BTS, Jacky St. James finds a moment to sit down with Sara Luvv.

At 4’11” she can be thrown around, the native Californian admits, which makes her a perfect submissive.

What is her number one tip on being a good sub?

“You have to feel like you genuinely want that person to get off really bad. [You] have to put them ahead of you. That’s how you find enjoyment out of it.” Concerning safe words, Sara admits she’s never had to use one because she’s not appeared in any “super hardcore stuff.”

That is the best news possible for her fans.