This is the third part to my adventure on a Dan O’Connell set. If it’s Girlfriends Films, it’s an enjoyable day with good people. 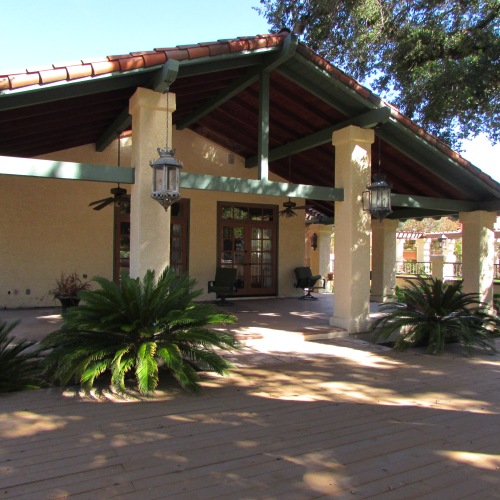 Two on the Veranda

Break time and my lovely assistant notices Jorden Kennedy and Aidra Fox on the veranda getting into each other.  Reminds me of Julie Andrew’s ditty in The Sound of Music “Getting to know you, getting to feel free and easy when I’m with you.” Precisely.

Jorden and I had talked earlier and she loves shooting for Dan, but for reasons the other performers didn’t mention.

The compliment fits Jorden’s professional agenda. The college grad likes Girlfriends “because there’s a story” in their shoots. “There’s back story, characters, and you get to act and I thoroughly enjoy that.”

Well, there’s not much acting going on outside right now as she and Aidra are getting deeper into the Julie Andrews theme!

The impact of Jorden and Aidra’s playful interaction is evident when the crew sets up the next bedroom scene. Dan is going over what he wants and Aidra pleads, “Can’t we just come in and have sex?” All that bullpen action on the veranda is paying a dividend.

The girls continue their fooling around on the bed while everyone else is still getting their individual act together.

Corralling their attention, Dan gives the girls their instructions, seemingly unneeded because Jorden beams, “We know what you like” and Aidra chimes in, “Let’s go, I’m ready.”

And finally, so is the crew.

The girls get their directions, but they know what
Dan likes

The tone of this scene is the opposite of the romantic flavor of the Dani/Vanessa episode earlier. These girls are going for rough and tumble.

Like schoolgirls, they’re listening attentively, but they’re ready to give Dan a hardcore show

But Dan reins them in a little with the directive, “more touch than kissing.” At the beginning he wants some restraint because that fits the format for the opening minutes.

Once the sex really gets underway, Dan lets them go. The girls do indeed know what he prefers and the scene has an energy that electrifies the room.

For clarification, the Jorden and Aidra scene is distinct from its Dani/Vanessa counterpart. These girls are into spitting, spanking, aggressive finger play, and crunching body movements, working each other over pretty well with heavy breathing and lustful expressions.

Aidra, in particular, smiles broadly and often, redefining the meaning of a sexual frolic.

Aidra climbs on board
Photo courtesy of Girlfriends Films

Unlike a constrained Vanessa an hour ago, there are no demons to exorcise here!

The girls wind things down with cuddling, a favorite Girlfriends Films romantic conclusion to hot sex.

The final look at a day with Dan O’Connell is next. I get an opportunity to chat with Vanessa Veracruz, Dani Daniels, and the irrepressible Aidra Fox.