Among those at our table was the performer I passed earlier that day, Jiz Lee. A handful of interviews with Jiz followed over the next couple of years and we developed a modest friendship.

Jiz became a central figure in my manuscript on feminism in adult film and now Jiz has a book out. It’s sensational, smartly edited, and I highly recommend it.

“Does your family know what you do?” 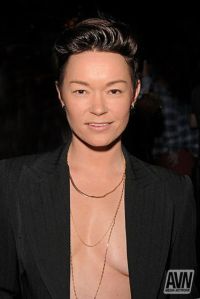 That question, wrapped around issues such as stigmatization, feminism, gender preferences, and fetish proclivities, jumps from the book as the reader begins the journey.

Lee contributes the first essay and from there acts as editor, sorting and arranging the contributors who willing offer what they do and why. Sexuality’s personal definition for each writer is woven throughout the pages.

What’s in a Name

Here’s a quick look that is a mere sampling of well over fifty short entries.

Adult company owner Courtney Trouble’s moving account of conversations with her father is an intimate expression of father-daughter love that contrasts markedly with bondage star Denali Winter, who recalls that the adult industry community saved her when family difficulties seemed insurmountable.

Both Denali and author Dale Cooper touch on the shame foisted on sexuality by religion.

The reader can choose preferred essays or take on the book cover to cover. Each writing is unique though limited, as Jiz Lee admits, to personalities of recent generations. The exceptions are legendary icons such as Nina Hartley, Annie Sprinkle, and the late Candida Royalle.

That is my Real Name

Regardless of how the book is tackled, two essays are a must read. Lorelei Lee’s finely crafted statement on “Naming” is balanced effectively with Stoya’s humor in “Noooooooodie Girl.”

In fact, Lorelei Lee’s essay is the book’s linchpin. She is brilliant when speaking of her empowerment. “Naming a thing makes it real,” she says, then remarks with pride that “slut, whore, sister, freak, artist, wife—all of it is truly, wholly me.”

Her bottom line? “Whatever name I choose, that is my real name.”

Jiz Lee’s extraordinary work is worth six stars out of five for anyone interested in the adult film industry.

The book is available at Amazon.