The Meaning of Consent: Tasha Reign

Tasha Reign is an outspoken pornography feminist whose political voice is ever present. Having entered adult film in 2010 at age twenty-one, she finds time to write about the industry, most recently for the Huffington Post, and when the opportunity arises, to crossover into independent film. We talked at the 2016 Adult Entertainment Expo.

“The situation with James and Stoya is very good for our industry, and also for every industry, because it has enabled a discussion that I don’t think would be there otherwise.”

Those are the words of Tasha Reign. We are sitting in the AVN media room at Vegas’ Hard Rock Hotel.

Tasha believes Stoya has demonstrated great courage in speaking out [about her abuse] and reminds us she isn’t “the only woman who has had that happen to her and not had her voice heard.”

Though Stoya’s fame helps to channel her message, consent remains a broader issue for sex worker and women’s rights. It’s something men must address.

“We live in a society based around patriarchy,” Tasha insists, which she wants to fight by speaking up all women.

Within the adult film industry, having sex on camera does not diminish performers or the rights that they have, she says. But not everyone gets the point “and that is why so many women have not spoken out.”

For her part, this formally educated professional has taken on the activist mantle to support women.

Tasha during our interview

The Line is Blurry

But, her limits on the set have been “crossed in ways that were more subtle.”

“Sometimes it’s difficult to identify when they happen,” she says. “It’s something you think later, ‘Wait, maybe this should have been more professional.'”

Those experiences have influenced the choices Tasha has made in moving her business pursuits forward.

“Whether I have somebody with me at all time at AVN like my security over there (she nods at a blue-suited gentleman sitting just to our right whose presence is meant to leave an impression) or whether it’s shooting for myself, I want to control every aspect of [my career].”

For the record, Tasha owns Reign Productions, writing and directing her own content.

She reiterates what others have told me. Talent should be educated about what to expect in adult entertainment.

To underscore how important this is, Tasha adds, “Nobody should be grabbing you and nobody should be having sex after you say ‘stop’ even if you consented prior to that.”

Fair enough, so what should everyone know about shooting sex and consent?

Referencing that her on-camera episodes may not be what her personal life is about, the UCLA grad concedes she had to learn to “slow-down” the action.

Sex is a power exchange and is not fun if you have equal power, she believes. “That’s okay. What’s not okay is when you say ‘no’ and they continue. That’s rape.”

It’s a “fine line,” Tasha admits, and “male talent, if they crossed limits” may “not even realize that’s the situation.” So, awareness is also important.

Tasha generalizes the circumstances to civilians, suggesting that in the work place men might “hug their co-worker or put their hand on their waist or smack them on the butt in a playful, friendly manner they might do with a friend.”

She doesn’t understand “how they would feel that [type of behavior] would be okay.”

To illustrate her point, Tasha comments on the message she sends her fans when standing with them for photographs. It’s particularly applicable this week since we are at the industry’s major trade show.

“I’ll have someone tell them they must have their hands at their side. There’s no touching whatsoever. I will pose around you because that’s what I feel comfortable with.”

However, though she is comfortable with her boundaries, Tasha does not mean to restrict another girl might find appealing.

“I think that if a woman wants to have a gang bang with an entire football team . . . or if she wants her friends to grab her” that’s her choice and “you have to own your choices and be conscious about what you’re doing.” 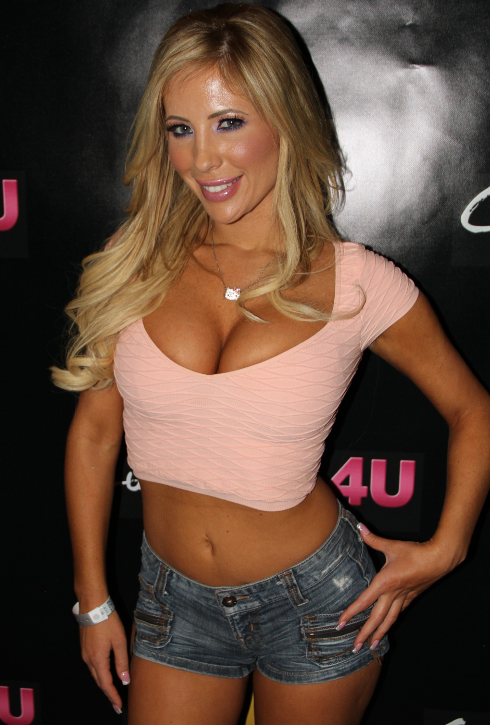 A Feminist Can Love Pornography

Tasha Reign points out a misconception the public has about adult film which she believes stems from a lack of “media literacy.”

Often people don’t understand that what they see in a sex scene is consensual among the talent, particularly if the shoot is rough. It appears the woman is being abused.

In particular, this is often the opinion of anti-porn feminists who know nothing about adult film. They conclude the scene was rape, when that is not the case, and, worst yet, never bother to talk with the models to get the real story.

“You can’t judge a consensual sex scene just because it was a rough scene. That’s not the way sex [in the industry] works,” Tasha states.

On the other hand, there is a bright side. “You can be a feminist and still love pornography and sex work,” Tasha declares, then turns her attention to an ongoing paradox that has politically agitated feminism for years.

“How in the world could you [as a feminist] condone having women make choices but then say they can’t have the choice to have sex for money? It makes no sense.”

As our allotted minutes run out, the performer/writer/producer/director follows up with one of her pet peeves.

“And it’s one hundred percent true.”