Cracked and Shattered: A Review of Theatre of Fear and Horror

“A special sensation of strangeness and mystery  . . . caused by a shadowing effect in the overhead lights” descended upon the audience. Within moments “an imperceptible, hazy illumination of red and green” crept over the stage.

And so another play in the Parisian theater of horror, The Grand Guignol, is under way but not without the tried and true “rule-of-thumb” of gore. The bigger splashes of blood were restricted to female performers; smaller costumes were easier to launder, after all. “Head wounds,” on the other hand, were assigned to men since shorter hair demanded less maintenance.

Fear and terror driven by insanity, sex, and violence dominated the short stage productions, but pulling everything off convincingly was not easy. Sleight-of-hand, magician’s tricks to create “an atmosphere of sickening and eerie realism,” was requisite. The house regulars stayed amused while first-timers might resort to running for the exits. 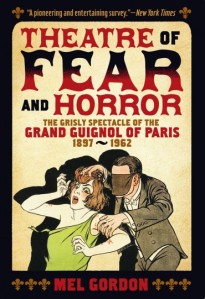 Mel Gordon’s Theatre of Fear and Horror: The Grisly Spectacle of the Grand Guignol of Paris, 1897-1962, is a new expanded version of the original 1988 publication. For all intents, Gordon’s work is the most concise account of a small performance venue that was truly one of a kind.

In its post-WWI heyday, the Grand Guignol set aside Expressionist art for naturalism and realism, displaying its graphic horror only a few feet from the audience. Fantasy was pushed aside because play topics came from brief newspaper items lifted from “police blotters.” Crime and mayhem marked the Parisian stage as the “place where every social taboo was cracked and shattered,” Gordon writes.

The Grand Guignol abetted the rise of the horror genre as Hollywood knew it in the 1920s and 1930s. Lon Chaney, John Barrymore, Bela Lugosi, and Boris Karloff “personified the acting styles” learned in the theater of terror. Films like the Expressionist, The Cabinet of Dr. Caligari (1920) and Alfred Hitchcock’s Psycho (1960) were weaned within the intimate confines of the Grand Guignol. Incidentally, Hitchcock single-handedly shattered the Hayes Code’s awkward  and repressive film censorship with Psycho.

Even famed psychologist Dr. Alfred Binet knew of the theater. He was one of its “most successful playwrights,” Gordon tells us. And there were others, particularly women who might have been considered too psychologically frail to appreciate the art form.

In the post-WWII era the theater had female ownership at times and “gave full creative reign to female producers.”

Oh yes, one of the theater’s less celebrated patrons was “a noodle and pastry cook” who later got involved with political causes. His name was Ho Chi Minh.

Mel Gordon’s book is a delightful read, informative without being stiflingly academic. For many readers it’s a primer, so the author obliges with the first third of his pages devoted to a short history of the theater.

After fits and starts, the compact space, once a chapel dating to the eighteenth century, takes on its legendary identity a decade or so before the First World War. Gordon guides the reader through the menagerie of personalities that brought the theater to life.

As mentioned, in the years between the wars the Grand Guignol flourished. One of its notable performers was simply known as Maxa, a woman who “was murdered more than 10,000 times and in some sixty ways” on stage. She was also terrorized by enduring over 3,000 rapes.

Gordon reprints an autobiographical piece written by Maxa (Paula Maxa, actually). In it she recounts her abuse at fifteen by a knife wielding boyfriend who beat her. He committed suicide shortly afterward. It was her first “‘romantic’ experience,” Maxa says, and led to a perverse definition of love.

Gordon also includes a short piece titled “Fear in Literature: An Essay” by Andre de Lorde, known as the “Prince of Terror.” He was one of the Grand Guignol’s most popular playwrights and understood the impact of  “the fear of being afraid” he describes as a nightmare with one foot “planted in reality.”

The Theatre of Fear and Horror also includes short summaries of a host of plays ranging from dramas to comedies (yes, the Grand Guignol format included them as relief from repeated terror). The final section offers up two plays in full dialogue. One of them, “A Crime in the Madhouse,” is authored by Alfred Binet and Andre de Lorde. Don’t miss it!

Most fascinating are the book’s illustrations. They are on every page and include photos, cartoons, and playbills. Particularly spectacular are the sixteen pages of all color posters. Thumbing through them, one gets the urge to find enlargements to frame and hang in the family room!

Congratulations to Dr. Mel Gordon on this update about a little known entertainment phenomenon.

The Theatre of Fear and Horror is published by Feral House. Here is customer information from Amazon.com.