Justine, Part One: The Novel

Jac Avila’s adaptation of the Marquis de Sade’s novel, Justine, is now available from Pacahamama/Decadent Films. Before taking a critical look at the movie, it’s helpful to have an understanding Sade’s work.

All references to the original story, Justine or the Misfortunes of Virtue, posted here come from the Oxford University Press paperback edition published in 2012. The translator is John Phillips.

During his time in the Bastille, the prolific author and playwright penned Justine. Published in 1791 after the French Revolution, the novel is an early example of pornography, eighteenth century style.

Sade’s story is a satirical work.

The marquis rails against the Church and society and marvels at the libertine (free thinking) way of life.

He uses Justine, a pathetic girl who tries to preserve her virtue in the face of overwhelming vice, as the punching bag to justify his philosophy.

The Story in Brief

At age twelve Justine and her older sister Juliette fall upon hard times. Though born of nobility, they are orphaned and penniless and forced to go their separate ways after leaving the protection of a convent. Fifteen years later, they meet again when Juliette is thirty and Justine well into her twenties.

Juliette lives a pleasurable life of vice, Justine a miserable one of virtue. Despite her desperate pleas to Heaven to protect her, Justine suffers a series of tribulations that include graphically described tortures and repeated sodomy.

Her tormenters come from all corners of society: criminal gangs, aristocrats, and churchmen among them.

Imprisoned by disreputable characters who abuse her incessantly, Justine is accused of various crimes, branded a whore, and is in the hands of the authorities when Juliette, known now as Madame de Lorsange, rescues her.

The novel is a flashback in which Justine recounts her miseries. Virtue is rewarded only briefly, however, as the poor lass is struck dead by a lightning bolt.

Influences on the Novelist

The Marquis de Sade was undoubtedly familiar with the fairy tales of fellow Frenchmen Charles Perrault, particularly “Little Red Riding Hood” and “Bluebeard” and incorporated elements of both (as well as sordid legends from around the world), in his novel.

Justine is often lost in the darkness of the woods, a terrifying experience and a reminder of Little Red Riding Hood’s dire straits.

Falling into the hands of one “bad wolf” after another, she ends up in foreboding environs typical of the Gothic writing of Sade’s day such as castles, forbidden rooms, and hidden monasteries where tortures occur.

Because Justine is trusting and gullible, she is often abandoned after being abused setting her up to be easily duped by the next person who comes long.

As this abysmal cycle continues, Justine meets other young women who likewise suffer indignities and sometimes death as do Bluebeard’s wives. 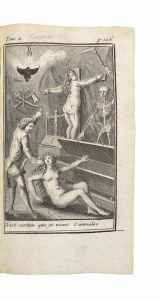 Justine is as much a philosophical statement as a decadent novel about libertine sexuality and anti-Church diatribes.

Incidentally, during the Enlightenment period, “libertine” originally referred to those who considered themselves atheists. Over time, the label was expanded to include sexually obscene written works.

Sade explores this further when Justine morphs into the lengthier , The New Justine, published in 1797. It is more pornographic than its older cousin. 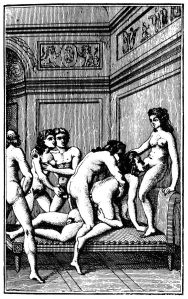 The first justifies its libertine leanings. Virtue is of little account. When Justine escapes prison with the help of Dubois and her gang, she is told, “abandon the path of virtue which has never brought you success.” Trust your instincts, the gang believes, and advises Justine that “moral feelings are deceptive, only physical sensations are true.”

In other words, vice is rewarded, a message Justine hears throughout the novel.

The second theme centers on religion. Sade is an atheist in a time when the hegemony of the Catholic Church in France is coming under fire.

The “creator” is a fantasy, the gang informs Justine. The only reality is the here and now and like a dog, they assert, why should we “abandon the bone for the shadows and renounce real pleasures for the sake of illusions?”

If anything in the state of nature (the time before societies existed according to the French philosopher Jean-Jacque Rousseau) is bad, why does nature allow it to exist?

This is Sade’s central question.

But the author is not finished. Later when Justine is under the thumb of the perverted monks, one of them, Clement, takes pride in their impiety, finding pleasure in the “egoism, cruelty, and debauchery” that offends “the mythical God.” 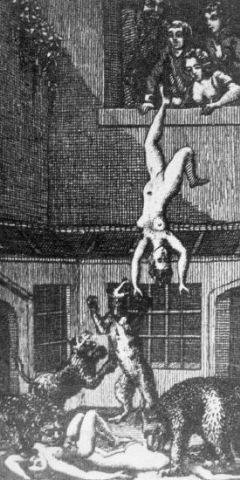 All of this is not to say that Sade believes that an end is an end. In fact, he has his own version of regeneration or eternal life, if you will.

The Comte de Bressac tells Justine that matter is “reborn in other guises” because “all men, all animals, all plants . . . grow, feed, and are destroyed.” They go back into the earth where they “never truly die but merely undergo variation and modification.”

“If nothing dies or is destroyed, [or] is ever lost in Nature,” he says, it’s “just waiting “to reappear immediately in new forms.”

To deny this process (even if it is what society calls murder) is the “real crime,” the scientist claims.

From Clement, the defiled Justine learns that “there are no tastes (sadomasochism included) that do not derive from the kind of make-up we have been given by Nature.” He expands on this inborn deviancy by stating the “pleasures of the senses are always dependent on the imagination.”

When Justine assails him for his “taste for cruelty and horror,” Clement retorts, “If Nature were offended by these tastes it would not inspire us [to express them].”

So we have Justine, a novel that tackles Jean-Jacque Rousseau’s social contract popular in eighteenth century France. Man is born into a State of Nature where there are no moral laws and must enter into communities to preserve himself.

Of course, Sade has his own libertine opinion on the outcome.

Next we’ll look at the characters from Justine Jac Avila has taken for his adaptation of the narrative.

One response to “Justine, Part One: The Novel”