This final post on Eros is for posterity. It is intended to give readers a heads up on an emerging female talent in filmmaking.

At this time, the direction Davyana San Miguel will take professionally is evolving. If she makes a name for herself in long run, this post will lend a meaningful back story to her career. 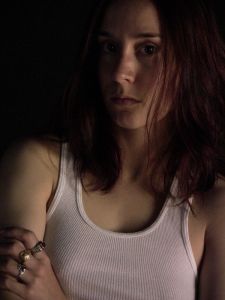 On this blog, I’ve reviewed Amy’s films with that point of view in mind, an especially challenging endeavor considering she is usually behind and in front of the camera simultaneously.

What is delightful about Amy is her willingness (eagerness?) to appear on-screen as the distressed female victim. Needless to say, her performances are powerful.

Interestingly, Amy sometimes constructs the film sets and the instruments of torture her characters (especially those she plays) endure on film. Often writing her own scripts which she also directs and produces, Amy is the complete package.

Labels notwithstanding, the now college professor is clearly a feminist filmmaker. Amy’s female protagonists assert themselves despite their dire circumstances.

Though her work doesn’t deal with horror or sadomasochistic themes, Davyana is in the beginning stages of a career much like Amy’s: cinematographer, director, actor.

“As a director, I do consider myself a feminist,” Davyana says, and by its very nature that statement takes on a political interpretation akin to Amy Hesketh.

“Recently, I’ve learned that 4% of Hollywood’s cinematographers are women, that means that 96% of the visuals we consume are inherently from a male gaze. Through my work, I hope to reframe the traditional lens and present things from my unique feminine perspective.”

Eros is the beginning of that journey.

Learning from the Bottom Up

As do all cinematographers, Davyana is learning her craft from the bottom up.

Here are some examples she mentions. They are from two separate productions.

“One was an independent short film called Mer, based in Brooklyn, New York. I was the second Camera Assistant on that shoot when I lived in New York for the summer of 2015,” she says.

“The second set is a senior thesis film from SFSU. I was the First Assistant Director on that one.” 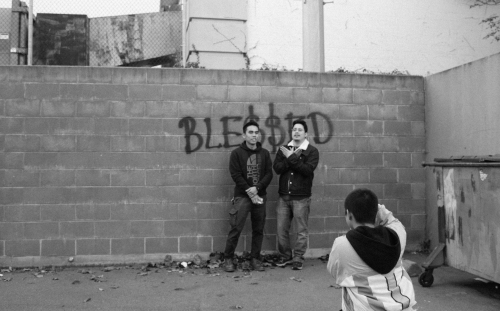 When I take a closer look at Davyana, I am persuaded that her on-camera appearances are notable, even if they are casual in nature. 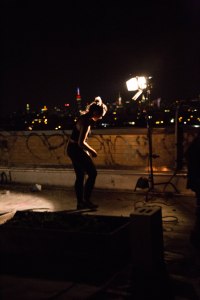 Davyana relates that the pic “was a BTS shot from Mer. I was adjusting the lights during a nighttime rooftop scene we filmed in Bushwick. For the same film we also shot at Coney Island for one of the locations.”

If you look closely, you’ll discover Davyana has a pixie quality about her that is breezy and cool.

Then there are other moments when Davyana steps in front of the camera and moves her image beyond the incidental.

“That vinyl record photo is one of my favorites photographed by my creative partner Mehran Karimabadi,” she says. “We were filming for our short film Du Bist Schon and had an impromptu photo shoot while we had the lights setup.”

The shot is happily inventive in its nature, I might add, because it frames Davyana San Miguel in a completely different light. She, like Amy Hesketh, is transformed into the center of the gaze while maintaining a subjective, rather than objective, quality.

In other words, she is the creator.

Knowing that Amy built a career on camera, I asked Davyana about modeling and acting.

“I have consider(ed) being in front of the camera more often,” she affirms, though she has some hesitancy.  “It’s a bit uncomfortable for me to step out of my comfort zone behind the camera.”

That discomfort is not from lack of experience it seems, but touches on Davyana’s ethnicity in today’s political/social climate that sadly minimizes, rather than celebrates, diversity.

She explains. “I rarely see anyone who looks like myself on-screen, which has subconsciously dictated how I view myself within society.

“I hope that by inserting myself in front of the camera more, others [will] feel accepted and recognized visually.”

If anything, that may be Davyana’s most significant contribution to film at this point in her career.

All things considered, like Amy Hesketh, Davyana San Miguel takes her image and frames it artistically and politically. Where Amy is presently more psychological in her work, Davyana leans toward a broader message of multiculturalism and LGBT acceptance. That is not to say Amy ignores this, nor does it imply that Davyana is downplaying internal psychological forces in her self-created images. Each woman borrows from the other.

Lastly, Amy is very fetish oriented, as we know. For Davyana, her fetish expression is somewhat spontaneous and less calculated. The native of Hawai’i comments on a photo I brought to her attention. I suggested it celebrates multiple fetishes.

“My mesh outfit was one that I wore to last year’s pride parade in San Francisco. I suppose that the overlay of fetishes was my intent,” she says.

But it seems the unconscious might have influenced her in a more innocent manner.

“I was simply expressing myself with things I had in my closet,” Davyana concludes.

Wow, what a closet!

So, here is perhaps the most deeply personal photo of them all, a product of mind and emotion that Amy Hesketh can appreciate.

You can see samples of Davyana’s work on her website.