We continue our conversation with Star Factory client Christiana Cinn.

Turning to the business of camming, I’m interested to know if Christiana thinks the online models establish their own market trends. In other words, do they create a demand for their product?

She responds, “The beauty with cam girls is that they’re a niche market. They don’t have to adhere to what society says is a beauty rule. If a girl wants to have purple hair with blue pubic hair, go for it because that’s going to appeal to somebody out there who’s already on their computer looking for someone like her.”

“They (cam models) remind me of characters and dolls, things out of comic books and stories, like fairytales,” Christiana continues. “They can look any way they like and play a character, do a cos-play.”

“Regular beauty standards do not apply to them, they set the trend of what they want and as long as they have fun doing it, I think it’s great,” she says.

“Think about people who do video games, are online, and spend a lot of their time on the computer. They want an outlet” that camming fulfills, she comments.

For the cam girl and her customer there’s another advantage.

“When you’re camming, you don’t have to face rejection” in an anything goes environment.  She offers an example. If a girl looks like an Avatar, painted blue or whatever, she says, that obviously appeals to some people.

“The possibilities for cam girls are endless and there’s something out there for everyone. There’s a fetish, there’s a taboo. And it’s safe because it’s all from the comfort of her own space. She’s not doing it for free. She’s doing it for business choices and for money because this is making her happy.”

Christiana is not so sure, or should we say she has a more egalitarian view.

“That’s not a very fair assumption. I don’t feel there should be a divide in the industry because we’re all sex workers. We’re all selling an ideal. Maybe people who are close-minded and even unkind would say there’s two different tiers or three different tiers and we’re not part of the same family.

“But my opinion, we are absolutely a part of the same special group of women. This is what we do.”

At this point, Christiana concedes there is a little difference, however.

“Maybe to be considered an amateur means they haven’t been shot by a professional studio per se. But it doesn’t mean that she can’t do it on her own or do whatever she wants. The amateur style would be like setting up your own camera, your video, your camera phone.”

Can we say a cam girl can create an amateur feel in her shows?

Before exploring the amateur product, Christiana reminds us of what pays her bills.

On the other hand, what pleases her viewer tastes is different.

“I like watching ‘cause that’s reality, they’re not doing it for anyone but themselves,”  Christiana says.

Christiana is concerned about sex worker safety particularly with the changes in the online advertising sites. “Taking down Backpage and the sex part from Craigslist” is a problem, she says, because it cost sex workers “a lot of their independence.” The result has put them in a “more risky and dangerous place.”

Having said that, Christiana understands the reasoning of the online services. “What they’re trying to do is prevent sex trafficking, but now anything advertising something exploitative is taken off. So, now there’s nothing.

“They really should have focused more on the actual trafficking aspect and where that’s happening” rather “than taking away from everybody. Now what are the girls supposed to do?” she asks.

Next, I bring up the AVN show’s Code of Conduct. It’s relatively new, but is it necessary? 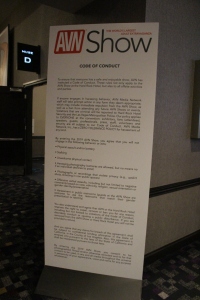 “For the first AVN I did years ago, I had to wear fake butt pads under my dress because people would pinch and squeeze your ass so much that it turns black and blue. Then what are you gonna do when you shoot tomorrow? Have bruises?

“But this year, people have been really respectful, really sweet. They’re just there to see you, take a picture, thanks for your time. They’re not mauling all over you. They’re not thinking it’s ok because they’ve seen you have sex.”

There’s a bit of humorous irony with the butt pad, though.

“I learned that trick from a girl who worked at Disneyland. She was a Disney princess. So, it’s not just happening here,” Christiana says with a wink and a nod.

Lastly, I mention the #MeToo movement. Has it caused people to be more respectful at the show this year?

“Well, it’s definitely made some changes. It’s brought attention to people who might feel entitled to your body or to touch you because they’re a fan and they paid to get in. Or, they’re with this company so ‘let me touch this’ or ‘do that’ because I’m gonna help you out.

“If that was their evil intention, it’s made them think twice because now we’re looking out for that,” Christiana Cinn says.

“It’s not just a free-for-all. Personally, I don’t mind touching, hugging, kissing or anything like that. But I don’t like being mauled by somebody and I’m struggling to get away. That’s never fun,” she concludes with a laugh.