The Actress as an Artist

When Bill Margold alerted me that Serena, one of the greats in adult film history, had finished her book, I knew a smidgen of advertising (or promotion) was in order.

A few years ago, Serena and I had some wonderful conversations via email. In its early years, the pantheon of porn’s best was a small sorority and her words helped establish a historical perspective on adult film’s creative women.

At the time of our communications, I was in the neophytic stages of my work on adult film feminism. Professorial interest in pro-sex feminists eventually led to my penning a popular history soon to be released by John Hunt Publishing. Needless to say, I relied heavily on interviews because my youth was not familiar with filmed pornography though I did see Georgina Spelvin on the big screen in my first “official” adult film, a story for another day. As a result, personal accounts became my literary lifeblood.

Serena was a conduit of information, addressing my questions about some of the feminists I was researching.

“As to the women you mentioned, I worked with Georgina and felt only love oozing from her. Later when I was involved with Jamie Gillis and living in NYC, we’d work for Gloria [Leonard]. She was sharp, she reminds me of a female Donald Trump. I also knew Marilyn [Chambers] who seemed very fit to me, her body and her mind were tense but elastic like an athlete’s.”

Serena’s love affair with the incomparable Jamie Gillis is legendary; the accomplishments of Gloria Leonard I have touched upon in my book. Sadly, both are now deceased and with the passing of Marilyn in 2009 and John Leslie and Harry Reems of late, there are fewer pioneers left of the old days.

So history is preserved whenever recollections are recorded. Bright Lights Lonely Nights: The Memories of Serena is out and available at Amazon here.

In the meantime, here’s a tribute to “the actress as artist” from Bill Margold, who also wrote the Forward for Serena’s book. It appears in the LA Xpress. 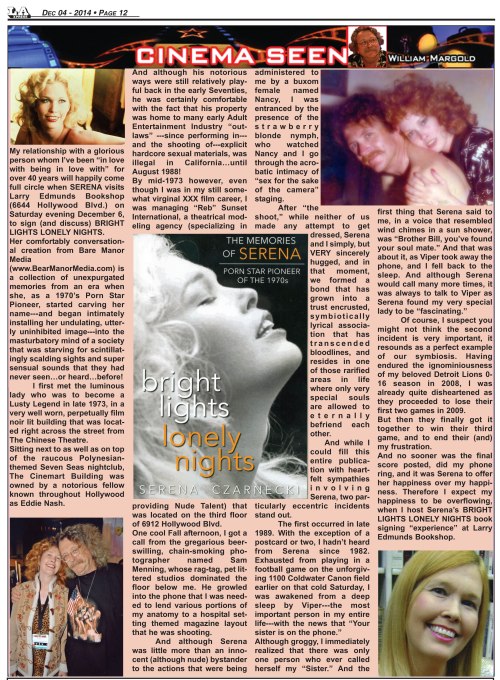