Now that we’ve introduced student filmmaker Davyana San Miguel, let’s have a conversation about what makes Eros a striking accomplishment. 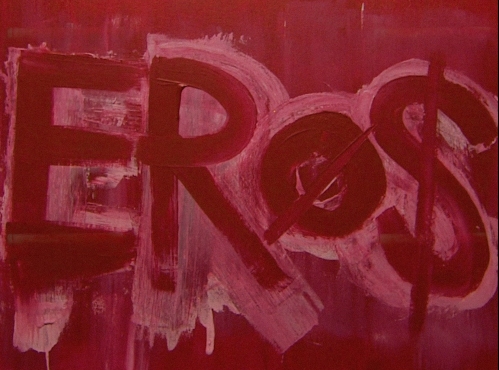 To begin, Davyana describes the film as “an audio-visual experience that explores themes of pornography and feminism through experimental filmic techniques.”

Without doubt, it accomplishes that.

After viewing the film, I wanted to share my thoughts with Davyana. One of them concerned how she chose to represent herself on-screen. As the film opens, the viewer’s first impression is Davyana with her back exposed to the camera by a very low-cut dress. To push an avant-garde button, she has buzzed her hair.

Was that intentional? Here’s what I found out.

Davyana shaved her head during a trip to London. Her hair was always long and a close trim was something she wanted to do, but her friends weren’t exactly supportive. 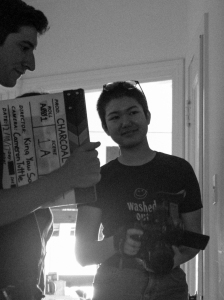 “According to their opinions, I wouldn’t be beautiful or feminine anymore if I shaved my hair,” she recalls.

“I decided to insert myself in the film to join the conversation and redefine the notions that a woman is defined by her adherence to traditional gender roles.”

What about baring her back?

“My outfit choice and camera angle are intentional but shouldn’t be over thought.” She comments. “There is no deeper meaning. I simply enjoyed the aesthetics of the shot.”

Unfortunately, I stand guilty of over thinking. Let me give you an example.

In a film review I did a couple of years ago, I interpreted a painting as cleverly defining connections within the plot and its characters. Later, the director thanked me for the observation, but the painting was incidental in the scene and lent no special meaning to the film, he said.

Well, this time around I argue that Davyana gave her film “deeper meaning” by putting her image in it and I agree with Dr. Augsburg who claims, “I think she also underscores the importance of feminist art since the 1960s–or what I call feminist ars erotica— by depicting herself working with paint in the film. She seemed literally to turn her back on the male gaze as well.”

The good professor is spot on.

Eros incorporates the feel of early film. There are sprocket holes continuously on-screen accompanied by flickering to create the effect of a reel-to-reel experience. Do the boxes on each side of the film have multiple meanings other than sprocket holes and did Davyana employ them to enhance the theme of the narrative? 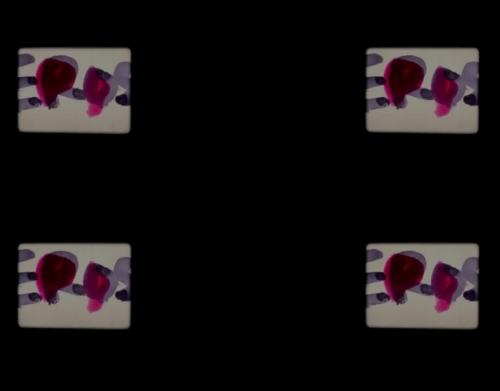 I think so. Grainy reel-to-reel images remind viewers there’s a bit of history going on with what they are seeing.

Incidentally, the effect confronts the male gaze engendered by stag films, the earliest version of motion picture pornography. If this is her intention, Davyana exposes how women’s sexuality has been viewed in our culture over time.

Here’s what she had to say, mixing in some techie talk with the film’s message.

“I’m intrigued by the psychological effects of subliminal messages. The grid pattern of 16mm hand-painted clear leader simply came together through experimentation. The strobing effect of the 16mm was achieved by filming the live projection.  Every frame is intentional and represents something related to the adult industry. I don’t want to give too much away; a lot is up for the audience to decode.”

Regarding Marilyn Chambers (in a clip taken from a TV appearance) and Andrea Dworkin as opposites in the film, Marilyn seems nervous; whereas, Dworkin is her usual forceful self.

Selecting those clips for Eros is astute filmmaking because Marilyn symbolizes the early days of the emerging 35 mm pornography phenomenon that is not quite sure of itself; whereas, Dworkin is a statement of suppressed (or repressed?) female sexuality, a longstanding cultural expectation then and now.

Does Davyana consider the two women as antithetical?

Having said that, what do we do with Dworkin and Annie Sprinkle?

Buckley and Days Gone By

What about conservative commentator William F. Buckley? Where does he fit in?

“I found his reactions as a moderator quite funny and left his shots in there. Talking about pornography and feminism can be overwhelming and tiring, hence the need for comedic relief,” Davyana comments.

No doubt, but let’s not forget that Buckley’s resume includes supporting McCarthyism, segregation (he was no friend of civil rights), and opposing multiculturalism. With her avant-garde lens, Davyana gives him the zapping he deserves, if ever so subtle, in a film that addresses a pair of ideas that would appall him: feminism and pornography.

Another segment of interest in Eros is the scene of women and typewriters. It presents a 1940s snapshot of the corporate world that Buckley would certainly endorse. Jobs are stamped out; typists are cloned. They are hardly in charge of their image. 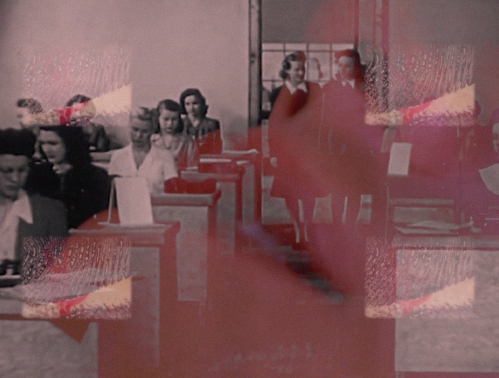 The vision is an innovative way to move the history of women forward because of how it defines society and the female statement within it.

“The shots of women training to be secretaries are included as a visual juxtaposition to the idea of an independent female who works in the adult industry,” Davyana declares. “These secretaries represent the women oppressed by a patriarchal society.”

Finally, how does Annie Sprinkle fit into Davyana’s message?

“I learned about Annie Sprinkle through Dr. Augsburg’s course,” the student artist says, and offers a “shout out” to her professor for “inspiring the themes discussed in Eros.”

Davyana explains that she needed “a credible source to help my argument that feminism and pornography can coexist.  What better person to ask than Annie Sprinkle, who has worked in the industry and created a successful art career because of her experiences.”

When I asked Dr. Tanya Augsburg about Davyana’s commitment to excellence, she said:

“I’m so impressed that she took the initiative to interview Anne Sprinkle, Shine Louise Houston, and yourself. What I appreciate so much about her remarkable film is that is also quite the feast for the eyes. She presents a full range of feminist perspectives in mesmerizing ways.”

I could not agree more and am most flattered to be a part of Davyana San Miguel’s continuing journey into filmmaking. 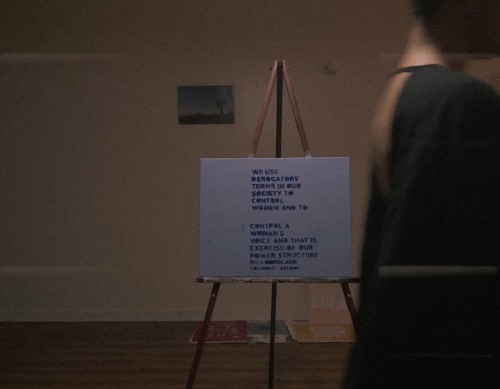 We have one more Davyana San Miguel post in front of us. This time we’ll talk about the artist up close and personal.