On the other hand, how does a writer/director authenticate bondage scenes and avoid the fluff and silliness that was the industry standard decades ago? I asked Jacky what she did to verify that Emma’s character was accurately presented. 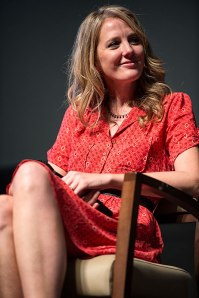 A Thoughtful Moment from the Director’s Chair
Photo Courtesy of Jacky St. James

And it created Emma.

Jacky then emphasized two concerns she considered most important in preparing to bring her vision from the writer’s pen to a well-produced DVD.

Once that goal was established, Jacky moved to her second issue.

“Kinky somehow implies that it’s different than the norm or not standard practice,” Jacky says. “All sex should be normal provided it’s legal and between consenting adults.” Emma Marx clearly reveals that kinky has several definitions of normal.

A Penny for Success 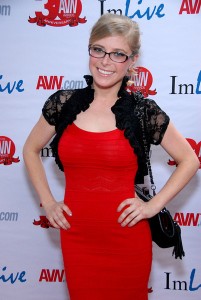 “The films I direct and write are absolutely feminist,” Jacky explains. That means finding performers who exude the feminist ideal appropriate for female characters Jacky describes as “the strongest, most independent” women she can create. Jacky’s women aren’t “solely defined by their relationships with men, but by their own values and desires.”

Likewise New Sensation male actors are more that buffed bodies behind their engorged masculinity. Jacky wants them to have feelings and personality and, of course, an intellect. They must be able to handle the “mental aspects of sexuality.” Jacky explains that her idea of good filmed sex means that both sexes must understand what sensuality means. It’s “a thought” and “a look,” part of the foreplay element that often distinguishes feminist filming.

Casting for Jacky St. James can be daunting because of the standards she demands. “I look for talented, well-adjusted people with great personalities,” she says. Shooting for the formally trained actress and director means that skill trumps a well-recognized porn name. Jacky’s hires must have a “level of intuition” for the character they are portraying and must be “in tune” emotionally with themselves and others.” The job is more than just reading a few lines. Performers are best suited for a New Sensations film if they carry the “passion and desire” to give their best. Jacky has the experience to encourage and persuade performers to come through with flying colors if they are willing and driven to do so.

How important is a good performance to Jacky St. James?  In a business that spends most of its filming budget on talent, Jacky insists on getting it right. She’s been called a slave driver, humorously of course, for her perfectionism. “If it takes twenty to get a scene right, then I’ll shoot twenty takes. There are no short cuts,” she declares.

A New Sensation’s production may require eighteen hour days, Jacky says, and often filming can consume a handful of days. That means her actors must have an “incredible work ethic.”

She was a “rewarding experience” for Jacky who admits she has “always connected” with Penny because the five foot dynamo is “a naturally open person.” Reaching “those places inside of her” are keystones that holds the Emma Marx narrative together. Jacky summarizes the film best when she says of Penny, she is “able to bring those powerful moments to life.”

4 responses to “No Short Cuts”