Maggie in the Smut Den

This is the first installment of a two part series on my visit to the dogfart/fabulouscash.com studio in downtown LA.

“I’m in the back alley. When you walk to my studio, you’ll think you’re scoring crack” reads the text I just received.

A warehouse hidden within the sprawl of Los Angeles weaves images of film noire and Sam Spade. Film is an illusion, is it not? Two days ago an elderly couple showed me Humphrey Bogart’s house: dark, mysterious, imposing, and right next door in the old Hollywoodland development where they’ve lived for decades.

Visions of Sam’s toughest case, The Maltese Falcon with Bogart, Mary Astor, and Peter Lorre float in its rarefied air.

Now it’s crack alley where the illusion plays out in another film venue unknown in Bogart’s day. Might Sam Spade have visited this very street sixty years ago with a femme fatale playing hide and seek with his suspicions?

The roll up door is raised and the Smut Den breathes in the street air. Billy Watson introduces himself with a charm that is only exceeded by Maggie, his femme fatale. I was tipped off that she’d steal me away with a single look. Maggie is no illusion, she’s the real deal. If I could keep my hands off her, I might learn a little something about internet pornography.

We have some time before the first girl arrives. Billy sits down for a few minutes to chat. Maggie is never far away. There’s little doubt she’s the glue that keeps the easygoing atmosphere of the Smut Den amiable to everyone. 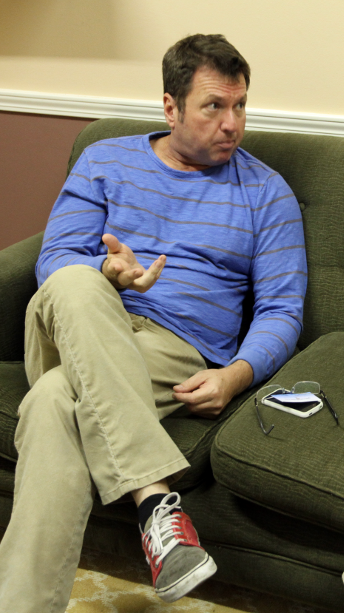 Andy San Dimas checks in for the first shoot. It’s old home week because Andy and I are from the same metro DC community. We have connections through the college where I teach. She was a student there for a time.

A pornoland veteran, Andy San Dimas has perfected the art of sexiness. Doron’s affability says it best, “Seeing Andy is like tempting me to convert to Christianity.” Now that’s power. 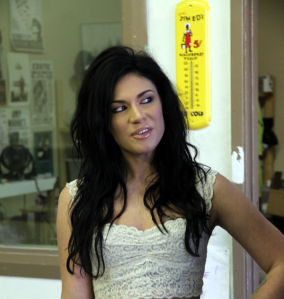 Andy’s quick to the make-up chair. She’s already a bit late and, as they say, time is money. Her male talent in the scene, Big Wire, has been hanging around for a while.

Within minutes Andy heads over to the green screen where Doron, who performed in the industry from 2004-06, has the narrative ready. Andy entices the viewer with a sultry voice that could melt the ice at the Iditarod finish line. With the vaguest hint of sloe-eyed poutiness and a wellspring of pure sexuality, the twenty-seven-year-old is an expert at the art of seduction A tilt of the head here, another with the shoulder there, and the fan is ready to pay to see her play.

Out in Six Months

The Smut Den is has a handful of sets so a seat is never far away. Finding a roomy couch, my photographer Bill and I have a brief time with Billy while Doron takes care of paperwork. Blood tests have to be reviewed before shooting begins and checking off 2257 forms is the bane of the industry. Maggie gets comfortable and Billy alerts me that a single touch will get me in trouble. I remember that Casey Calvert, who loves shooting in the Smut Den, similarly forewarned me. Did Bogart feel this way about his femme fatales?

Billy explains that girls in their late teens are “eager and dumb” and jump into the industry with no preparation. They rarely understand their own sexuality and sex on camera for pay can turn into an emotional and psychological slippery slope. They’re kids having “wacky sex too soon,” Billy says, doing every “crazy fetish” out there. Unfortunately, most are too immature to save their money. Taking in $15,000-$20,000 per month as a new hot product is overwhelming, Billy adds, and many newbies leave the biz having spent it all and then some.

“Eighty percent are out in six to seven months,” Billy says.

A Change of Plans

In the late 1990s getting the content was a breeze because the studios regarded the internet as a joke . Copy six scenes from a DVD then “burn them and turn them into digital and put them on your website,” Billy says. That was his friend’s game.

As for Billy, his professional goal was a tenured teaching position and a finished novel under his belt. But that bubble burst, leaving dream residue all over his face. The real money, it turn outs, would be a pop shot all over a girl’s face.

So he joined the internet flood. The goal was a constant money flow. “Keep ‘em happy for thirty days,” Billy explains, and use “an army of affiliates.” He maintained his site and got payment from a membership list that reached into the thousands.

By the mid-2000s the big guys caught on and copying content was more difficult. Original work moved to the front of the queue. Exclusive content was now the show.

Billy leaves his Arizona home where he was shooting amateurs and joins his friend. At the time, cyberspace cinematographers had an unexpected financial perk. The internet was cheaper when it came to hiring the models. Agencies received a grand for the girls on DVD sets; they sent them to internet shoots for thirty percent less.

Of course, shooting original material has always led to infringement of some variety and will most likely plague the industry well into the future.

Fortunately today’s paying members support the industry and the models, Billy says. The problem is the “non-paying guys” who believe they have the “right” to get content for free.

In time Billy got into his present studio and dabbled in still photography along with filming. He owns his website and directs for blacksonblondes which generates much of his income. On this Monday afternoon, Andy is doing a glory hole episode. No condoms because Billy has to abide by his boss’s preferences.

Madelyn Monroe will arrive shortly to shoot for Billy’s website and safer sex will be on scene. But first a look at Andy as she gets to down and dirty.

The ever present Maggie watches it all. Like Sam Spade, weakness overcomes me. I touch and it’s cool . . .