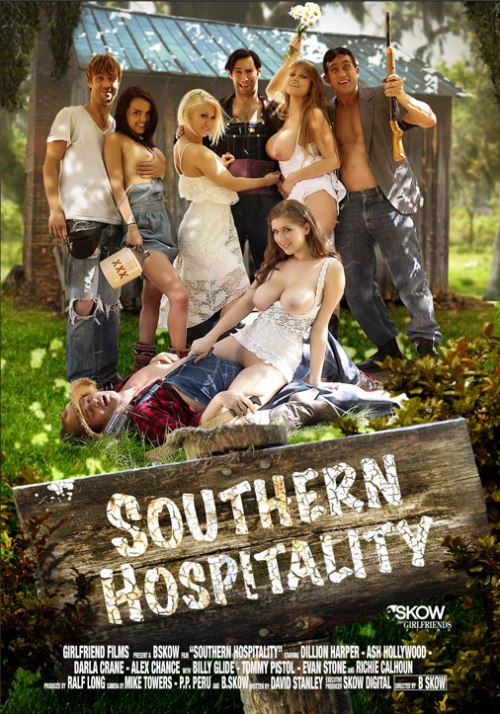 Southern Hospitality is a B. Skow film about accommodatin’ love and marriage hillbilly style, Appalachian sociability fueled by homemade liquor and outfoxin’ the law. Jon Jo (Evan Stone) is a landowner of little note who collects female property he passes off as wives. As the movie opens, he’s marrying mate number three, “Small” (Alex Chance). After the informal ceremony, JJ gives his newest wife over to his other honeys, a somewhat disenchanted “Large” (Ash Hollywood) and a bored “Medium” (Dillion Harper). They’ll warm her up in a classic Girlfriends Films’ all-girl scene before Jon Jo collects his husbandly due, her virginity. At least, that’s the plan. It’s the second part that gets mucked up.

Unbeknownst to this happy group is the arrival of the Fuggs, a lawless family of Mama (Darla Crane) and her three sons: Tiny (Richie Calhoun), Teeny (Billy Glide), and Mighty (Tommy Pistol).

Jon Jo consumes too much moonshine to keep his thinking cap on so Mama and the boys squat on his land, set up a still, and percolate trouble.

In the meantime, Tiny and Medium fall in love (after she sneaks peeks of him in the shower) and hide out to avoid family entanglements. Suddenly, lightning strikes. Ash and Small go searching for Medium and Small falls victim to sexual assault from the leftover Fuggs.

The rest of the story is about revenge and final reconciliation with all the Hillbilly grace one film can muster. Bodies are buried and plans changed in an entertaining tale that is carried to its success by two performers, Ash Hollywood and Alex Chance.

A throuoghly enjoyable film, Southern Hospitality is brimming with B. Skow ingredients: good acting, humor, a dark side typical of Skow, and a heavy dose of social satire. 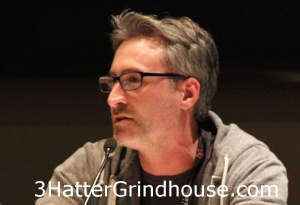 Southern Hospitality survives and moves forward through the voiceover narrative. Ash Hollywood is the chronicler and as an actress faces formidable tasks. She must convince the audience her character, Large, is coming into her own as the story progresses and do it with a southern drawl that sells the tale.

In talking about Ash, Skow reminds everyone that his films are “just like Hollywood” where good actors (he mentions Meryl Streep and George Clooney) are going to create winning roles.

“There are certain people that perform,” the director says. “Ash is just a great performer [and] she has an interesting look.”

Commenting that Ash had “so much dialogue” along with the voiceover, Skow describes hours of one-on-one directing that were “relaxing” rather than tedious and, from a director’s standpoint, creatively challenging. “You can really work with an actor to give you what you need,” he says, adding in this case it was the dialogue that made the story convincing. “We were in the room for hours with her [Ash] trying to get that stuff down. It was so hard to keep the accent [going].” 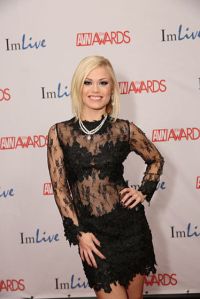 B. Skow affirms that despite the demands and hard work, the film was completed on time. “You know, I had thirty hours to do that movie,” he says.

Ash Hollywood also plays the one character that develops during the film. She is the movie’s central focus. In the end she stands up to Jon Jo and leads the final getaway, completing her empowerment image.

Asked about Alex Chance, Skow says, she “has a specific look in her.” She’s “young, cheery, great girl” and a good actress.

Alex is perfectly cast as the innocent third wife whose future, according the rules of Hillbilly Haven, is shattered when she’s molested and penetrated in a modified gang bang with Teeny and Mighty. Her sadness and hopelessness at the loss of her virginity is powerfully portrayed as the film moves toward its climax. If Ash Holloway is the narrative’s driving force, Alex Chance is the emotional glue that holds the story together.

B. Skow describes what he loves about the native Virginian.

“In the movie she really held the accent, really loved the part,” he says. Alex appreciates being in a feature, he notes, a circumstance not always true of other performers. 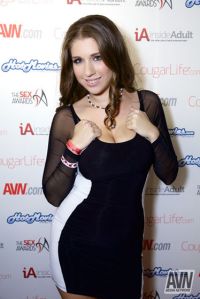 “Some girls come on the set and make their money, got their underwear in a zip lock bag,” Skow begins. “Then you have an Alex Chance who comes in. She’s printed out the script not only for herself, but in case someone else needs it. She highlights her lines.”

He remembers Alex telling him she watched a media presentation to get the accent down.

For her efforts, the buxom lass gets the highest of compliments. “She appreciates the business,” Skow explains. “There are certain people who accept what we do and appreciate it and enjoy it.”

Pausing in a reflective moment, B. Skow compliments Girlfriends for giving him “full freedom” to explore his creative mind. In this case, Alex Chance accommodated his fantasy.

Working with Alex Chance was rewarding because Skow wanted to film the scene as it would happen naturally, or as he suggests, unimpeded. Many directors look for chemistry first among performers, but that’s not always what motivates B. Skow. It’s the scene as it is embedded in the feature that counts. In the case of Southern Hospitality, “everyone understood it and did it,” he says.

In fact, sexual connections among performers may not always be good for a feature, he insists. “During the fucking, chemistry should be there, they need it,” Skow admits, but “they also need to remember what they’re doing. You need to be able to get them into a character.”

“In my head I want to see how that girl’s going to react in that moment,” Skow says. He wanted a realistic response from Alex. He was not disappointed. “She was awesome!” he says.

Southern Hospitality has good sex. For the viewer who wants to sit back and enjoy a scene, Richie Calhoun and Dillion Harper are a “can’t miss.” For fans of older woman/younger woman, the predator theme that Girlfriends values so highly, Darla Crane and Ash Hollywood fill the bill.

But it’s the satire and social commentary that makes this version of Hillbilly Haven a winner.

When Large tries to explain to Mama Fugg how the wives of Jon Jo are arranged in a familial way, Mama responds, “No offense girly, but ain’t you a little too far from Utah to have such an arrangement?”

Large defends the Hillbilly ethos. “We ain’t Mormons or nothin’. We have our way of livin’.” The implication that “our way” is somewhere in Kentucky makes this Appalachian social zinger too good to miss.

B. Skow does not deny part of his work is satire. “I wouldn’t want to generalize,” he begins, but “I definitely have that in me, I’ve always had that weird way of looking at what I like. I’m very observant and my mind goes into very unusual places.”

Is he politically correct? Perhaps not and he doesn’t see that as an issue.

“I think it’s fun to be comfortable and do things where people are going to be like, ‘Oh my God,’” he says. Then in a  moment of social commentary, Skow observes, “We’re in a time when people are putting everything about themselves everywhere.”

Personally, it’s not something he can do. “I’m not comfortable with it,” he says, “it would take me a half hour to write a sentence on twitter. I have nothing to say about myself.”

Geniuses often don’t, their art is their expression.

But the implication is clear. When putting yourself out there for all to see, political correctness is difficult to maintain.

Perhaps that is B. Skow’s message in Southern Hospitality, a hilariously dark and funny film that is a satirical gem.