At this year’s Adult Entertainment Expo I caught up with one of porn’s most popular veterans, Allie Haze.

Finding a quiet spot away from the convention floor, we put aside press etiquette (the normal trade show interview runs about fifteen minutes) for a longer talk.

At the outset of our conversation, I asked about the consent issue that is prevalent in the biz today. Her remarks are covered in another post on this blog.

All photos are courtesy of Allie’s twitter fan site. Credits are watermarked.

How I was Raised

A Southern California girl who now lives in Las Vegas, Allie Haze’s adolescence was wrapped up in the church. It’s a subject I wanted to explore because of my own background.

“I grew up really religious,” she begins. “My family worked together to make sure all the kids went to church. It was how I was raised.”

Quite unexpectedly, her commitment to the faith shaped an early marriage.

“In junior high I started going to a missionary Baptist church. Between junior high and high school I was good friends with this guy who I eventually married.”

Her husband was a preacher at eighteen, something that seems an anomaly to most people.

Allie explains that in the missionary branch of the Baptist church, responsibility to administer the faith is divided between two individuals. The pastor is in charge of the congregation, whereas “the preacher gives the message.”

When a young man is called by God, he goes to seminary, which Allie’s future husband did at sixteen. In fact, their church was “also a certified seminary school,” she says, making everything convenient. As his wife-to-be, Allie also attended.

“It was a really cool experience,” the twenty-eight year old says, “because I learned a lot and it’s shaped me into who I was and I would never take that away.”

Not Supposed to Screw Up

That part of her past causes Allie to reflect on how aging gives us a broader perspective on who we become. In her case, it’s about being an adult entertainer.

“Looking back now I’m ten years older than most girls starting out in the business,” she says.

To her, they are so young and are not giving themselves room to grow into adulthood. But Allie is quick to state that her own decisions at that age were not much different.

“We were young,” she begins. “I had my engagement ring my senior year.”

As often happens with teenage love, fate was not to favor the couple.

“It ended up not working out, unfortunately. He got into a bad car accident and the prescription pills . . . It was too much. It changed who he was.”

I didn’t ask for details about the mishap or the drugs, preferring to let Allie stay in her comfort zone.

“Around twenty I decided I needed to get divorced. No matter how much we tried, it just wasn’t going to work.”

It was a difficult resolution because her conservative upbringing dictated that marriage was “the one thing I’m not supposed to screw up. It’s supposed to be in my blood to be a wife,” Allie says.

A sense of failure permeated her thinking. “It was a real big struggle I went through,” she comments. 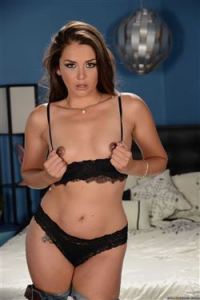 Give Allie credit for handling this dilemma with grace and open-mindedness. It explains a lot about who she is today. The strength and resiliency she carried at a tender age has served her well in a business that can grind away the hardiest of souls.

However, despite all the stress, the end of the marriage brought opportunity and Allie stepped forward.

“During that time I decided to go back to school to be a firefighter which was originally what I wanted to do. I was halfway through the program when I got into a bad car accident.”

As happened with her ex-husband, an automobile wreck changed the direction of her life and led to the performer we know today.

Check out the news about Allie Haze on twitter @teamalliehaze. This is a fan site.