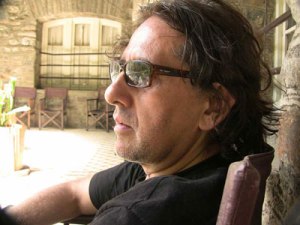 In reviewing Dead But Dreaming, I have taken a limited perspective. The film, however, is rich with unexplored layers of meaning that beg for further interpretation. That’s the true measure of art and a salute to director Jac Avila’s innovative work.

Dead But Dreaming is a film of contrasts and parallels in a narrative driven by the ordeals of Aphrodisia and Moire.

They come from distant lands but their appearances are quite different. Moire’s fair complexion and reddish blonde hair is a counterpoint to Aphrodisia’s fiery exotic look framed by her black hair and paradoxically sad eyes.

As we’ve seen, both are sexually assaulted while bound. Aphrodisia responds with anger; whereas, a stoic Moire endures her trauma.

On the other hand, both victims are visually eroticized when they are punished. Their differences lie in their humiliation, Moire’s being public, Aphrodisia’s the fate of a slave.

The story’s three crucifixions are also contrasting. Aphrodisia suffers a slave’s death on a cross; Moire is the victim of political persecution while Nahara faces an interrogation with a religious overtone (notice the wound in her side inflicted by a wooden crucifix).  Does vampirism feed off Christian mythology and is that what frightens the priest Ferenc so much?

Though Moire is resigned to her fate, Aphrodisia and Nahara are angry. Nahara pulls at the chains securing her to a box-like metal frame in an underground cavern compliments of Ferenc’s mission to stamp out evil.

Speaking of the priest, he and Nahara trade confrontational stares throughout the film in a reminder of Dr. Van Helsing’s pursuit of Dracula in the Bram Stoker novel. In effect, they are mythological parallels in contrasting poses.

Varna, dressed in civilian clothes, meets Moire on the street with a less than astonished,  “You’re dead.” Moire’s now eternal state does not appear to surprise the former nun-in-training because she can no longer dismiss the supernatural.

Moire is concerned for Varna.

When I was dead but dreaming, Moire says, “I heard you,” referring to Varna’s promise to carry on her mission, and “I don’t want you to take my place.”

Varna is warned. Stay out of the revolution because the whipping post awaits, and seek the church as a shield from Nahara, who has a talent for turning those who pray into prey. 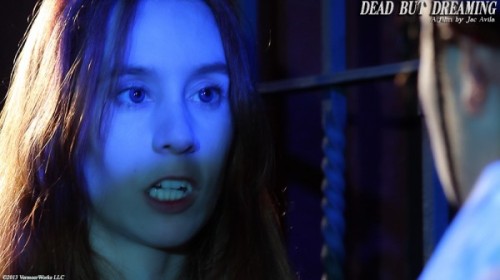 Wasted words because Varna is the independent woman celebrated by feminism. She makes her own decisions but will be forever hounded just as feminists have always suffered society’s condemnation.

As the film winds down, Varna  is seduced by Aphrodisia and ends up in the lair where earlier the vampires feasted on a local woman.

Rather than taste Varna’s virginity, Asa releases her in a nod to the next installment of Dead But Dreaming.

“She will lead us to Nahara,” he says to Aphrodisia.

Unexpectedly, Varna shows up at the stable and wants to join Moire, who was anticipating Nahara’s arrival. The viewer learns that the Lamia was killed by Ferenc. But she cannot die, Moire says matter-of-factly, and we know what that means . . .

As they ride away, the Irish traveler warns Varna, “She will find us someday.” It’s a cat and mouse game playing out in vampire land.

So who is Varna?

Throughout the film, this novice nun cannot look away, cannot confine herself to the safety of her cultural box because she sees perspectives beyond her own personal vision. She is the observer.

Simply put, Varna is us.

Finally, Dead has endearing touches that make the film a pleasure.

Director Jac Avila cautions us to not go too far in willfully suspending our disbelief. Granted we are dealing with an indie film that suffers expected budgetary constraints that limit retakes. The upside of that inadvertently breaks the theatrical “fourth wall” by letting the viewer in on the game.

Though the sacrificial virgin in beginning (10,000 years ago) keeps her mouth closed, her metal braces are still visible. A close-up Moire’s feet at the whipping post reveals her pedicure. And in a vampire attack on a La Paz street, Aphrodisia loses one of her fake nails.

I love this stuff because nobody can waste a dollar in the indie business. If anything, it’s an artistic challenge Hollywood cannot appreciate.

I’m left with only one question. Why do the vampires have blue eyes?

Is blue a dreaming state because it is peaceful? Or, is “vampire blue” sad and depressing?

I’ve got a theory. In the Bram Stoker tradition, vampires are condemned to come out at night and, of course, can never again inhale the light of day. So the undead must carry the blue sky in their eyes as a cruel joke; their dilated black pupils push aside the ever present, but forbidden, daytime to see at night.

Another take on the color suggests the “eternal light” of Church doctrine must always be vigilant. Hence the blue crucifix hanging on the church wall and the street scenes shot in a blue hue. 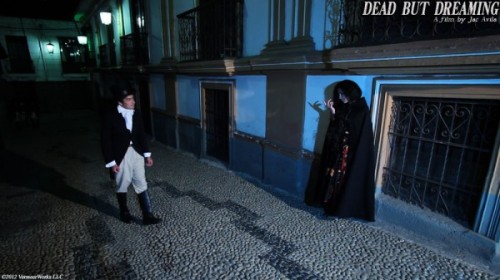 In closing, my congratulations to the entire production team of Dead. The cinematography is impressive and captures costumes and settings that are authentic representations of La Paz in 1805.

Dead’s pace is lively and the intercutting supremely done to bring the story together. Only once did I think the movie strained itself. The extended scene between Demetrius and Chrysis in Antioch tended to drag with a somewhat flat dialogue delivery. But in the overall scheme of things, that’s minor. 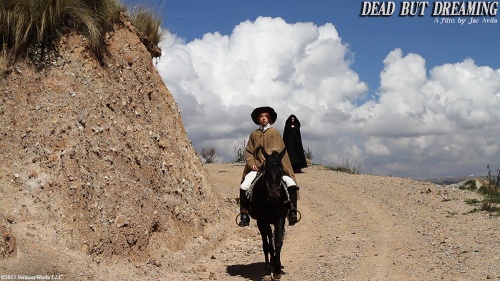 The Irish traveler descends the path with Nahara not far behind

Incidentally, the opening credits offer a clever  indication that this film has a tale to tell. The motif is about travelers who are descending into something we do not yet know. Moire rides her horse down a path and is followed by the mysterious Nahara. When the scene shifts to Asa’s first appearance, he is going down a hill.

Set up the viewer with a suggestion and Dead But Dreaming readies the audience for that first deliciously irresistible bloody bite into a terrific story.

As I mentioned in the first post on this movie, I am venturing into new territory with this analysis. After repeated viewings, I’m reluctant to call Dead a horror film. It is more of a historical drama armed with a political message wrapped in a supernatural fantasy. Though I agree with Eric Antione who characterizes the movie as a “gothic adventure story,” I think it goes deeper than that. Much like Maleficarum, another Amy Hesketh film about victimization, Dead condemns a society that condemns women.

Speaking of  Maleficarum, two young women are tortured under the sadistic auspices of the Church because they don’t fit in. Amy and Mila Joy are innocent victims whipped, racked, and bloodied in realistic scenes. Yet, Maleficarum is not gratuitous violence. The film depicts the abuses society brings on those who drift away from the norm. Watch it with Arthur Miller’s The Crucible in mind because Jac Avila’s script and Miller’s story are based on real accounts.

What I do believe is what Dead But Dreaming does so well, replay the female oppression theme of Maleficarum with a more forceful feminist message.

I hope to review another Amy Hesketh production. She is a breath of fresh air unknown to many film fans.

For my tastes, any performer who comments on her nudity with, “My body is my instrument so I’m going to use it,” is quietly telling us she is more than attractively packaged female flesh.

Amy Hesketh is smart, talented, and lusts after each scene she shoots.

Congrats on a great movie and here’s betting that there’s a Dead II in the works.

2 responses to “Dead But Dreaming, Part 4: Horror or History?”