Baroque and Gothic: Views of Justine

Followers of this blog know I’ve reviewed, or should I say deconstructed and analyzed, several of Amy Hesketh’s and Jac Avila’s films.

And, there’s more on tap in the future.

Fortunately, Amy and Jac took time to talk with me about their storytelling and directing, the topic of this series of five posts.

In this installment we’re looking at Justine, a film released through Vermeerworks and reviewed on this blog in December, 2016.

The adaptation and directing are Jac Avila’s with Amy appearing as Justine. 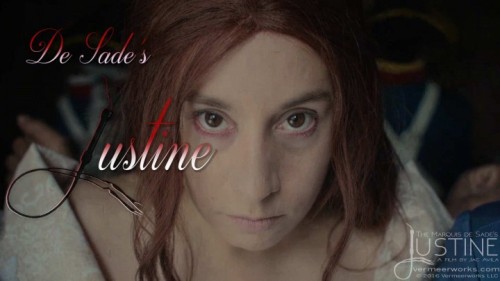 To get us started, Amy compares Jac’s thematic perspective with hers. A quick glance at Dead But Dreaming, Ollala, Barbazul, and Justine affirms her view.

“Jac has a very baroque perspective of character and I have a very gothic perspective.” Amy begins. 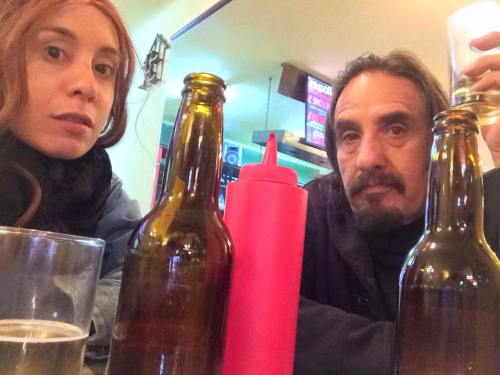 “You could say we have opposite points of view a lot of times. He loves martyrs. He adores them. It’s that baroque Catholic upbringing. For me, I do not have that so I view them as silly and passive-aggressive. I’m quite dismissive of them.”

But Amy is quick to add, “I feel like that has actually helped us work together.”

Justine is rife with religion motifs, I mention.

“Oh yeah. That’s from him,” she says with a smile. “My view of religion is extremely dim.”

Amy notes that Jac has a “more analytical standpoint” on faith, which she feels on principle is “much more harmful than good.”

So how might Jac’s baroque paradigm influence Amy’s performance in Justine?

First, her interpretation of the Marquis De Sade’s Justine as novel and character is not generous.

“I will confess I did not make it through the entire book because it’s so tediously written.”

Despite her weariness with De Sade’s literary style, Amy read enough to get a flavor for Justine as a character, but couldn’t empathize with the silly girl’s tribulations that went far beyond normal human endurance.

Her attitude toward Justine soured.

“I hated Justine, I fucking hated her!” Amy declares.

Not surprisingly, things then got difficult.

“For me, I have to find a way into a character [and the story] in order to act it, write it, direct it. For Justine, I tried a lot of different angles. I just couldn’t find that way in.

“So we worked on her character. Jac and I tried to look at her from different perspectives and eventually we nailed it.”

Amy explains Justine is portrayed as a “kind of victim. . . with a certain passive-aggressive knowledge of what she is doing.”

As a cinematic team they pulled it off beautifully, particularly in the scenes where Justine endures the whip and applies it as well. 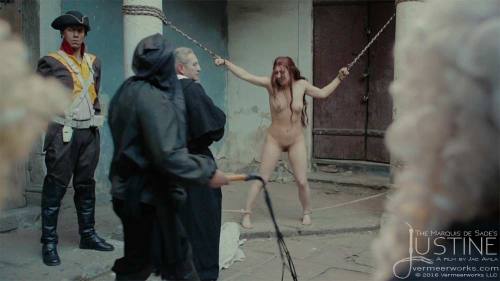 Amy’s idea to create a workable version of Justine’s character was to break the fourth wall with her as narrator, though Justine’s sister, Juliette (played by Cortney Willis) also uses the technique.

So, how to persuade Jac?

His bathroom is decorated with black tile, so Amy came up with a clever plan.

“I had this idea writing with chalk on the tile. Eventually he noticed it and over time thought it’d be a good idea. So we went through the script and blocked off and changed some of the dialogue so I would be speaking directly to the audience.”

From my perception of their work, I suggest to Jac that Amy seems to select roles that involve victims of emotional pain and physical torture like Mariana in Maleficarum and her portrayal of Ollala. What’s his take on that?

“The characters she plays appeal to her, yes, and at the same time scare her,” Jac says. 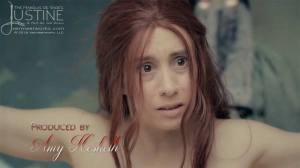 “In her view Justine is an idiot,” Jac explains. “However as in any art, a part of us is in those characters and a part of our experience is expressed in them. In some cases it becomes cathartic.”

Good point and it’s an injustice to suggest that Amy’s performance as Justine, sprinkled with a severe dose of vacuous submissiveness, is anything short of spectacular.

Setting aside for a moment Justine as a leading character, Jac offers his perspective on the novel and it’s not far from Amy’s and his honesty is laudable.

“You read the book, so you know how complex, long, sometimes even boring, the story is.

“It’s built on dialogues and monologues, speeches, really, with two points of view expressed through many characters with the same voice, except for Justine, who speaks for ‘virtue.’”

The characters Jac references try vainly to convince Justine that ‘vice,’ their reason to be, is far superior to virtue. 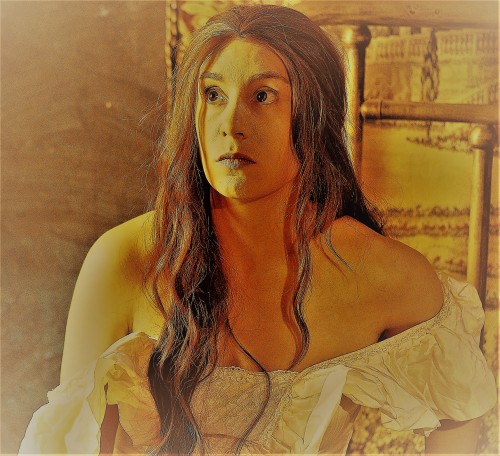 Jac also mentions an unintended shortcoming of Justine that affects how we see the story.

“The translation from the old French probably takes away something that is part of De Sade’s mind. Dark humor. He’s making fun of his society.”

And that is exactly why breaking the fourth wall works so well in the film. For example, check out Amy’s deadpan and creepily amusing delivery of Justine’s comments while she is raped after her public flogging.

“De Sade is wordy to the extreme, as you know, and most of the book is either Justine’s monologues or long, unending dialogues and discussions impossible to film without putting everyone to sleep. I made my own story taking those passages in the book that I felt could be translated into a visual story.

“I cut the dialogues to a minimum, and altered the ending completely. I used the characters I liked the best, some retained their storyline while Rodin, the leading male character, became the puppet master. The narrative is still in the hands of Justine.”

Again, the value of the fourth wall technique, it drives the story forward and gives the viewer a taste of De Sade’s cynicism.

So what can we say of Amy’s input into Jac’s film?

Enough apparently to highlight Justine as an extension of what can more broadly be called the Avila/Hesketh “Baroque/Gothic Collaborative Process.” 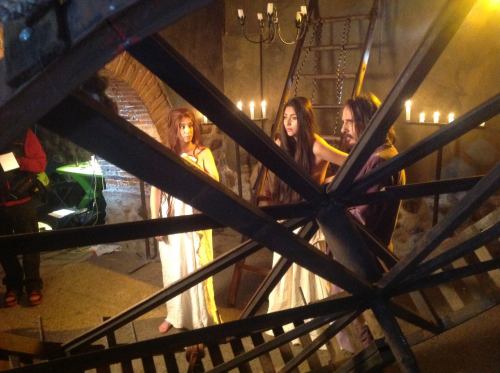 “Amy and I collaborate very closely in all the films, we both produce them. We discuss the scripts, always. We both contribute to each other’s movies with some ideas, suggestions, and so on. I do the editing, mostly, so I do work on the structure of the story, but either me or Amy, depending on who’s directing, decides the pace the film will have,” Jac explains.

Sounds good, but what is Amy’s take on their joint venture when he’s in charge?

As we’ve seen, she internalizes her character before they discuss her perspective on the role she is playing.

It’s a process familiar to Jac.

“It’s so thorough and so detailed that essentially there will be no surprises for him,” Amy remarks.

“We have extensive conversations about my character and he pretty much knows what I’m going to do,” she says, so in the end, “Jac really doesn’t direct me very much.”

She defines their on-set teamwork as “more of a dialogue.”

On the other hand, what happens when they switch professional “hats,” so to speak, and she becomes the director?

Amy chuckles in that endearing way that highlights a warm relationship long in the making.

“I direct him heavily,” she muses. “I really hammer on him because he has lots of habits and things like that.” 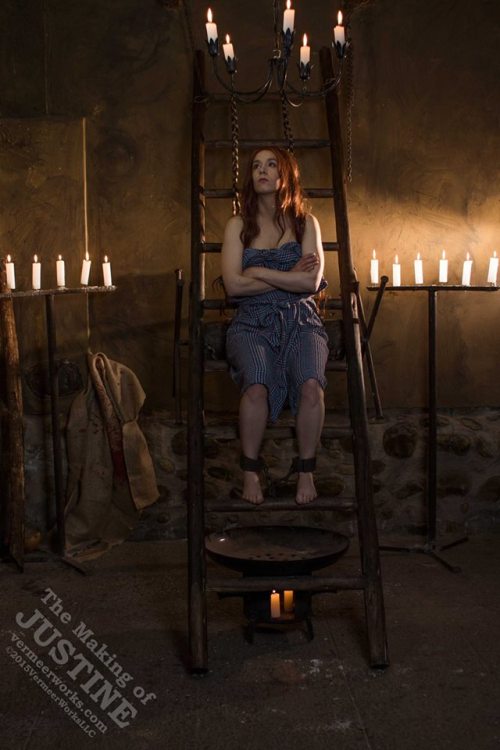 In the next post, we’ll meet the two actresses who join with Amy to play the trio of victims in Justine and get their perspective on their roles.

Before we do that, however, why don’t you take a moment to watch the cast test the wheel for the film here and here.

And, for an earlier look at Jac Avila, check my three-part blog series published in August, 2016.