Some interviews at adult trade shows are arranged via PR firms while others are off-the-cuff pickups gained through networking. At this year’s Adult entertainment Expo we had two valuable talks with camming couples we met on the floor.

Tom and Honey are cammers who operate online through Chaturbate. To say they are comfortable in their own skin (and that of their partner’s!) is an understatement. Not only do they have a loyal following, they have an exceptional understanding of the camming business model.

“Our live broadcasts drive the clip sales,” Tom responds. “When we’re online people see us, they talk to us. They have that connection.” Out of that comes a built-in marketing advantage, he adds, because fans will ask about the vids they shot on location in Las Vegas or Miami, for example.

Honey reinforces what Tom says. “People who want to directly talk to you. They want that interaction. They want to know you as a person,” whereas other fans just want “to see you performing the sexual acts.” They’ll buy the clips.

This division between the active and passive fan is common among cammers, as we’ve discovered. 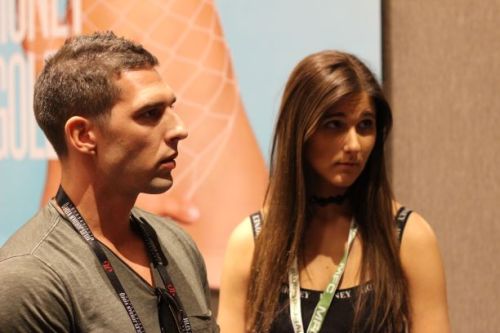 “We are the amateurs!” Tom asserts. There’s a market for fans who don’t want the professional look. They like “the slightly shaky camera,” Tom says, and the feeling that they are “filming” the show.

On the other hand, cam production is improving. Tom explains that their equipment parallels the big studios. They have tripods and gimbals. Plus, they shoot in 4K and employ the “same editing software that the pro companies use.”

In other words, the quality gap is not that large, he declares.

Considering that, are cammers becoming the new professionals? Will today’s amateur be tomorrow’s pro? 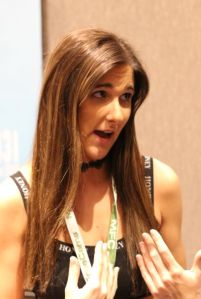 Honey seems to think so. It’s “a very hot topic right now. People are saying that cammers are taking over,” she says.

Then cammers are the people next door having a little fun. Right?

In chorus, Tom and Honey respond with “exactly.”

Cammers are tilting the amateur in the direction of the professional?

They repeat with a resounding “yes.”

Certain they won’t, Honey says, “yes, I would agree with that most definitely!”

Tom brings up an significant issue that separates a cam show from a professional shoot. For a sex act in real time, who determines the direction of the presentation and the timing of individual moments as the show evolves?

“We allow them (the fans) to vote on things like that.” Tom says, making everyone online a director.

Finally, what is on the horizon for the adult industry and camming?

Honey concludes our conversation with, “Camming is a really good way to get a feel for the industry if this is where you want to be. . . .”

Exactly. And that leads us to our next cam couple. Let’s see what they have to say.