Being in the midst of writing book number two on the adult film industry, I decided to take a time out to compose a series of articles on a girl I’ve recently come to know. She is a sweetheart of many flavors. 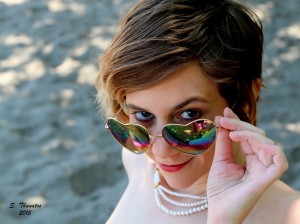 How to describe a girl whose on-screen image leaves an impression fetish aficionados can’t shake: a calculated disheveled look that captures the heart of every BDSMer? Try this, a natural body with understated and controlled ink seductively placed to entice the eye with a simple message, “I’m here, let’s play a little?”

But that’s only part of the story. Mercy can be cute as the sweet little miss winking at the preacher’s son while the Sunday sermon drones on, ready for a romp with the righteous.

“Because of how I look I can still pass as vanilla in some productions,” Mercy says “But because of my past, I get offers for some quite extreme stuff as well.”

Despite her girlish look, Mercy West is no teenager. In fact, she is a most mature twenty-five. Psychologists know that the brain takes its time reaching adulthood and its ability to make good decisions kicks in around the mid-twenties. Mercy knows what she wants and is ready to move forward. Lucky for her fans, they’re getting the best part of the ride. 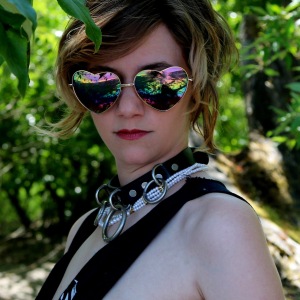 Most importantly, Mercy West is honest. “I fell into this business because I saw a group of people I could possibly relate to and a career that I would actually enjoy investing my time in.” Adult entertainment is not for everyone, but in this Tucson girl’s case it rewards a hypersexual attitude that surely eclipses a career in customer and food service.

Mercy self-identifies as pan-sexual, gender fluid, and polyamorous, insisting that “I don’t think about a person’s biological sex or chosen gender when I choose partners.”

The current Portland, Oregon resident enjoys men, women, and “other gender fluids and everything in between.” Though she felt like “a sexual outcast” in her adolescent years, “even in some GLBTI (gay, lesbian, bisexual, transgender, intersex) friendly situations,” Mercy is delighted with the sexual kaleidoscope she now emotionally snuggles.

Regardless of how she defines herself and those around her, Mercy is having a blast.

“My adventure into the [adult] business has led me to people who are open, accepting, and as excited to work in this industry as I am,” she beams.

But she has more to tell us.

Mercy insists that her gender identification “changes pretty frequently.” Her hair drifts from long to short and her wardrobe is “pretty inconsistent,” though “vintage clothing” is a preference. “Phases” is how she describes her fluidity.

“Sometimes I find myself wanting to use my strap-on with a skinny tattooed bisexual boy I make suck my cock and call me master. Other times I just want to lay back and indulge in a little ‘age play’ with my much older, straight partner.”

Nevertheless, those pesky labels are the bane of Mercy West. She is a biological female, of course, but there is more beneath the obvious. Mercy admits growing “tired of people getting upset [because] I honestly could not tell them what I was.” With a hint of exasperation, she adds, “It took me years to get where I am with my feeling about my sexuality,” insisting that now she is anything but “confused” about her accumulated preferences, statuses, and desires.

As for her love life, Mercy finally realized her modus operandi was different from others. She confesses, “I kept putting myself in ‘manogamish’ relationships that confined me to one primary partner for the sake of  love.'” She felt restricted to “someone else’s idea of what a relationship was supposed to be.”

“I began to realize that if I wanted to be truly happy I would have to build the life I wanted.” She needed to find “workable sexual and emotional relationships” because monogamy was unreasonably confining and uncomfortable.

“I was actually super unhappy,” Mercy declares, “because of other people’s insecurities and fears, not my own.” It was a Hydra that dominated her personal life, a destructive force brought on by one-on-one relationships.

Now at twenty-five with options ahead of her, Mercy West fondly embraces the words of her partner.

“When we met you had a whole life that I knew nothing about, you have connections with people I don’t know and experience things that I never could. All of those things shape you, the whole person I love. Why would I want to change that? Change the person I fell in love with?”

Rejection is a the real demon when relationships teeter on the abyss of the personally intense. But Mercy’s partner tossed that aside, encouraging her to explore all possibilities.

“Live, love, and grow as much as you can. I’m just happy to be able to walk beside you for at least a little while.”

And so are we because now it’s obvious what getting out of that box is all about, no labels in sight, only phases.