My thanks to AVN’s Dan Miller, Brian Gross, and Jill Hagara for making my visit to the show enjoyable. Their hard work cannot be appreciated enough.

Also, special kudos is extended to my favorite PR company, StarFactory. Thank you Tanya and Alex! 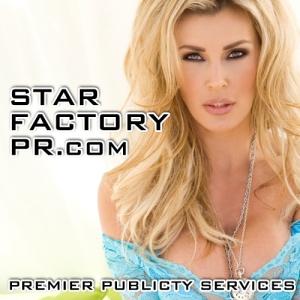 Rarely do I get to attend all the seminars that pique my interest and this year’s AEE was no exception.  Nevertheless, I did make a few.

On the show’s opening day, the seminar on money was super informative.

On the practical side to the money equation, a company like Nate Glass’s Takedown Piracy can be a great benefit to all producers in protecting their content.

Before the panel began, I spoke briefly with Nate Glass and met Chauntelle for the first time, a real treat.

Thursday afternoon offered up the seminar on the legal battles that may lie ahead with the incoming Trump administration.

After attorney Clyde DeWitt recounted the history of the Meese Commission’s pursuit of pornographers in the 1980s, Reed Lee, First Amendment scholar from Chicago and a member of the Free Speech Coalition, calmed nerves somewhat when he asserted that “history is on our side” and the “clear march of social progress is in our favor.”

Nevertheless, Free Speech Coalition’s President Eric Leue emphasized that passivity can no longer be the watchword and that everyone has a dog in this fight. In other words, support FSC.

Outside the hall, I had a moment to catch up with Colin Rowntree of Wasteland.com who plays both host and panelist when needed at these seminars. We talked about the possible political outcomes that face the industry.

Later that same day, another panel highlighted the increasingly independent role of women in adult.

Is the sun setting on “feminism” in the industry as some attendees seemed to hint?

AEE is a constant round of rockin’ and rollin’, but there is occasional downtime, or to be honest, the need to take a break. I found a few minutes in the press room where the always upbeat Jill Hagara took some time for a chat. We’ve know each other for a few years now and she is a delight.

More relaxation moments came at the small Dunkin’ Donuts shop right off the casino where the convenient access for a quick coffee attracts industry people.

I talked with performer Daisy Layne after running into her earlier in the hallway.

A statuesque beauty named Amber Jo sidled up next to me with her java and Boston cream doughnut in hand. She’s networking, AJ said, and that began an informative chat.

Later Amber posed for my photographer and I offered to do a story on her. She’s an exotic dancer from the Midwest who has thoughts of LA and the biz. Stay tuned to see what happens with this gorgeous girl. Maybe a new star will soon be on-screen!

Setting up interviews is never easy and once again this year I relied on the best PR people in the business, Star Factory, whose watchwords are dependability and reliability. Their clients do not flake on the press.

With the help of Steve Nelson, the editor of AINews.com, I usually nail down a couple of people for impromptu interviews. This year the highlights were the previously mentioned Emma Hix at Foxxx Modeling and Kasey Warner, the star of B Skow’s Color Blind. Kasey and I are from the same part of the country which made our talk special. 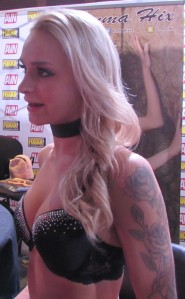 Speaking of Skow, his productions are distributed by one of my favorite companies, Girlfriends Films. As mentioned in part one of this post, Moose, the company president, invited me to the GFFs suite for a morning coffee on Thursday, a great way to start the day.

Eventually, a text helped me find AVN’s senior editor, Dan Miller. I first met Dan’s warm personality and infectious smile when he was with XBIZ.

We took a few minutes to discuss the passing of adult film historian Bill Margold (Dan did a wonderful obit for AVN online) and I mentioned that this year’s show was well-organized, enriching everyone’s experience from fan to media.

Helping to make this year’s AEE enjoyable were some not so subtle changes in the “feel” of the show.

The club music in The Joint wasn’t nearly the volume of the past which made conversation easier–a boon when one carries around a digital recorder–the lighting much improved, and best of all, the traffic flow was smoother among the various rooms. Thank you AVN!

After experiencing the breezy atmosphere of the Sands Center some years ago, I was doubtful AVN could pull everything off in a more broken up environment. And at first it was a challenge, but the bugs have been worked out.

On the downside, there was one thing distinctly different this year: the weather. The days were cloudy, very cool, with periods of rain, the same weather pattern I left back home. The only difference, it seemed, were the trees. I’m not used to seeing rain, mist, and palm trees!

Despite that, inside the Hard Rock the action was invigorating and informative.

I encourage everyone to visit next year, or to put it another way, attending AEE at least once in your adult life should be on your bucket list.