The 2017 AEE Extravaganza: Part One

I just returned from my annual trip to Las Vegas for the adult industry trade show. As usual my photographer and I teamed with Steve Nelson, the editor of Adult Industry News, to cover as much as possible in our brief four days.

This post is the first of two parts and represents only a portion of what we recorded.

A note on the hyperlinks. If a company’s online home page displays hardcore photos, I did not include the hyperlink here as it may not be suitable for all readers.

Photos provided by AVN are credited where appropriate.

This year’s show was one the best I’ve attended. Here are few highlights.

On the production side of the business, I had another opportunity to interview the always busy John Stagliano of Evil Angel. He gave me some thoughts on the incoming administration in Washington DC (my part of the country, by the way). Later in the week, John participated in a seminar on the same topic.

As the week was winding down, I renewed acquaintances with Moose of Girlfriends Films. Though they no longer have a booth in the show, Girlfriends has upped its game on the distribution side of the business and Moose is in Vegas to refresh his industry contacts.

Negotiating The Joint and the Artist and Muse Halls on opening day was easy, the crowd was a little sparser than I anticipated. By week’s end the fan traffic picked up considerably and the show was bustling with an upbeat tempo.

The refreshing part of the AEE experience is running into people unexpectedly. Here are a few examples of my week.

A text exchange led to breakfast with seasoned pro, Natasha Nice. We discussed the possibility of her writing a post or two for this blog. 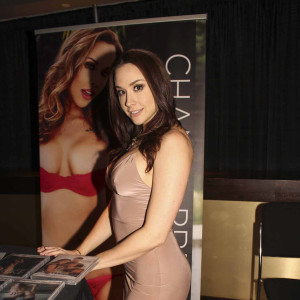 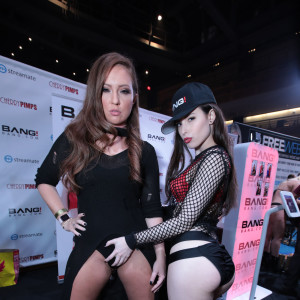 And, by the way, I visited with Chris Cane of Foxxx Modeling where I met a new girl who is bound to become a star, Emma Hix. My interview with this sweetie follows in another post.

Oh yes, timing sometimes fails me. I attempted to persuade a hurried Riley Reid to pause for a “hello” but I might as well have tried to hail a bullet train!

I met Emma Chase, a Chaturbate girl who stopped me for a moment to demonstrate with her computer how our conversation was soaring through cyberspace. Emma lists her talents as simply “entertainer.”  She’s a delight and if Chaturbate is your thing, go to Google and search her out.

For the oglers, the Chaturbate crowd had the distinction of being the least dressed. Lots of flesh with pasties all around.

From the marketing side, let’s not forget VR. The Cam4VR booth offered a rousing example of what the whole virtual reality thing is all about; it’s the wave of the future.

I interviewed Ela Darling and among her many talents is a love of VR.

The bondage carnival known as The Lair relocated from the second level of The Joint to the floor of Artist Hall, a move I’m sure to increase its visibility and fan traffic.

Lastly, every year I come away with the same thought on the show. Artist and Muse Halls are easier to negotiate than the tight spaces of The Joint. Being a bit claustrophobic, I do appreciate the efforts of AVN to keep movement as smooth as possible!

Stay tuned for part two of this report.